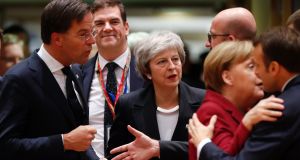 British prime minister Theresa May arrives for a meeting at an EU summit in Brussels. Photograph: AP Photo/Alastair Grant

British prime minister Theresa May has insisted to EU leaders that she can get her Brexit deal through the British parliament, despite heavy criticism of the agreement from all sides of the House of Commons.

At a summit in Brussels on Thursday with the leaders of the 27 remaining EU member states, she said that to pass the deal she first had to be able to convince MPs the UK would not find itself tied to the EU indefinitely through the Northern Ireland backstop contained in the agreement.

Mrs May sought to lobby European leaders for changes to the Brexit withdrawal agreement after she survived a confidence vote among her own MPs which was called due to concerns over the deal.

“There is a majority in my parliament who want to leave with a deal, so with the right assurances this deal can be passed,” she told the leaders, in remarks released by Downing Street.

“Indeed it is the only deal capable of getting through my parliament.”

Mrs May said a package of assurances on the backstop could “change the dynamic” at Westminster.

At the same time, she made clear a failure by EU leaders to offer such concessions risked the collapse of the whole agreement, resulting in a disorderly, no-deal Brexit when the UK leaves the bloc next March.

“We have to change the perception that the backstop could be a trap from which the UK could not escape. Until we do, the deal – our deal – is at risk,” she said.

“I am in no doubt that the best result for all of us is to get this deal delivered in an orderly way and to get it done now.

“It is in none of our interests to run the risk of accidental no-deal, with all the disruption that would bring, or to allow this to drag on any further.”

She ended by saying: “Over the last few years I hope I have shown you can trust me to do what is right . . . however difficult that might be for me politically.”

Following her address, Mrs May took questions from the other leaders, before leaving the summit while they discussed their response over dinner.

Taoiseach Leo Varadkar held a lengthy meeting with Mrs May in Brussels this morning ahead of the summit.

After the meeting Mr Varadkar reiterated that renegotiating the Brexit withdrawal agreement was not an option.

Ahead of #EUCO I will meet PM @theresa_may for last-minute talks.

“The deal that we have is the only deal on the table . . . while it is far from perfect, I believe it is good for Britain and good for the European Union and I sincerely hope that it can still be ratified,” he said.

Mr Varadkar said the EU would try to offer explanations and assurances that may assist MPs understand the agreement, “but the backstop is not on the table”.

The backstop is a default option designed to ensure there will be no hard Border in Ireland post-Brexit unless and until alternative arrangements covering the issue are made.

Mr Varadkar also reiterated that the UK could take away the threat of a no-deal Brexit outcome by withdrawing from or pausing the article 50 exit process.

“We need to get this deal over the line,” Mrs May said on arrival in Brussels, adding that she had “heard loud and clear” the concerns of rebels from her own Tory party who had tried to unseat her over the Brexit deal, which she agreed with EU leaders last month.

“I don’t expect an immediate breakthrough,” Mrs May added, but she said she would be telling other leaders of the “legal and political assurances” her party sceptics needed, especially over the risk of the backstop becoming permanent.

However, the dilemma Mrs May faces is the same as before the confidence vote: how to convince the EU to tweak the withdrawal agreement so that it will be passed by the British parliament.

The scale of her challenge is clear from the text of draft summit “conclusions” leaked to journalists in Brussels on Thursday.

These reaffirm the commitment of EU leaders to the withdrawal agreement and state that they plan to step up preparations for a no-deal scenario.

The text of the draft says member states “intend to proceed with its [the Brexit deal’s] ratification. It is not open for renegotiation.”

Bracketed text, not yet agreed and subject to potential tinkering tonight by the leaders, offers assurance to Mrs May, saying that “the backstop does not represent a desirable outcome for the [European] Union.

“The backstop is only intended as an insurance policy to prevent a hard Border on the island of Ireland/It is the Union’s firm determination to work speedily on a subsequent agreement that established by December 31st, 2020, alternative arrangements, so that the backstop will not need to be triggered.”

December 31st, 2020, refers to the end of the transition period following Brexit.

The draft states: “The European Council also underlines that, if the backstop were nevertheless to be triggered, it would apply only temporarily unless and until it is superseded by a subsequent agreement.

“In such a case, the Union would use its best endeavours to negotiate and conclude expeditiously a subsequent agreement that would replace the backstop, so that it would only be in place for a short period and only as long as strictly necessary.”

Leaders will consider whether further assurances may be required but “such assurance will not change or contradict the withdrawal agreement”.

EU diplomats insist the language in and out of brackets represents no more than a reiteration of the commitments made in the withdrawal agreement.

French president Emmanuel Macron was blunt ahead of the meeting on Thursday. “We can have a political discussion tonight, but the legal framework and the agreement that were negotiated are not supposed to change,” he told reporters.

German chancellor Angela Merkel was less strident, saying: “We can of course talk about whether there are additional assurances, but in this the 27 EU members are together and will make their interests clear, although always in the spirit that we want very, very good relations with Great Britain after Great Britain has left the European Union.”

Austrian chancellor Sebastian Kurz, who currently holds the rotating EU presidency, suggested there could be a special Brexit summit in January to agree “additional assurances” which could be attached to the political declaration on the UK’s future relationship with the EU.

Meanwhile, former European Commission president José Manuel Barroso tweeted that “wisdom should prevail” and the EU should find a “creative solution” to the backstop issue, due to the importance of the bloc’s relationship with the UK.

Speaking outside 10 Downing Street after the confidence vote on Wednesday, Mrs May promised to find a legally binding solution to the backstop that would satisfy the DUP, saying the Brexit deal could only win a majority in the House of Commons with the support of the DUP, which props up the British PM’s minority government.

She added it would not be a success to pass a Brexit deal only to be unable to govern afterwards.

“We emphasised that tinkering around the edges would not work. We were not seeking assurances or promises. We wanted fundamental legal text changes,” DUP leader Arlene Foster said in relation to the Brexit deal on Wednesday.

A Downing Street spokeswoman confirmed on Thursday that it was the British government’s aim to hold the vote in the House of Commons on the Brexit deal “as soon as possible in January”. Additional reporting: Reuters/PA