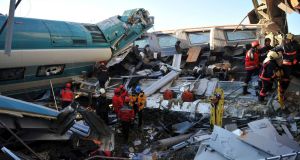 Rescue services work at the scene of a train crash in Ankara, Turkey. Photograph: IHA via AP

Nine people were killed and nearly 50 injured in Turkey when a high-speed train collided with a locomotive before crashing into a station platform and overpass in an Ankara suburb early on Thursday, officials said.

Rescuers were working to free people trapped under the mangled wreckage at Marsandiz train station, 8km from central Ankara.

The train was en route from Ankara to the central Turkish city of Konya, and was not due to stop at the station.

Three train drivers were among the nine killed in the crash, minister for transport Cahit Turhan told reporters on the scene.

There were 206 passengers on the high-speed train, according to the state-owned Anadolu news agency, which also reported that the Ankara state prosecutor’s office had launched an investigation into the incident.

Ankara governor Vasip Sahin said the high-speed train crashed into a locomotive that was checking the tracks at the station.

“Our hope is that there are no other victims,” he said.

Private NTV television said at least two carriages derailed. Parts of the overpass collapsed on to the train.

Several ambulances and rescue teams were sent to the scene. – Reuters/AP