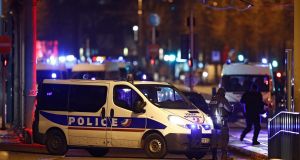 Cherif Chekatt, the 29-year-old man suspected of carrying out a gun attack outside a Christmas market in Strasbourg on December 11th that left three people dead and 13 others wounded, was shot dead by police on Thursday night.

Chekatt had been wounded in the arm by police amid the market rampage. He then commandeered a taxi which dropped him off in Neudorf, the neighbourhood in Strasbourg where he lived. There was speculation that Chekatt escaped to Germany, but he was found hiding in a warehouse in the Plaine des Bouchers in the eastern French city’s Meinau neighbourhood, near Neudorf.

Islamic State, also known as Isis, claimed responsibility for Chekatt’s killing spree. The dead include a Thai tourist and an Afghan mechanic. Three of the wounded are “between life and death”, interior minister Christophe Castaner said.

Police had staged a vast security sweep through Neudorf earlier on Thursday.

Three police officers in a squad car saw a man coming out of a building who looked like Chekatt and turned around. Chekatt then fired on their car. The police fired back through the open windows of their vehicle. None of the police were wounded.

Chekatt’s name appeared on the “S” list of suspected radical Islamists. He had 27 criminal convictions and had served prison sentences in France and Germany. He was radicalised in prison.

Strasbourg is considered a stronghold of radical Islam. Ten per cent of those on the “S” list live in the area. An al-Qaeda plot to bomb the Christmas market was foiled in 2000. One of those charged in that case, Slimane Khalfaoui, spent 10 years in prison and is now in Iraq or Syria.

A network that sent Muslims from Strasbourg to Syria was dismantled in 2014. Karim Mohamed-Aggad, from Strasbourg, was the brother of one of the killers in the November 2015 Bataclan massacre in Paris and fought in the ranks of Isis.

More than 700 police and gendarmes were mobilised in the 48-hour manhunt for Chekatt. Five people from Chekatt’s entourage, including family members, were arrested before he was killed.

The Christmas market had remained closed since the attack but will reopen on Friday. Security has been stepped up. The number of entry points has been reduced from 19 to 15 and trams will no longer stop there.

Speaking at the EU summit in Brussels on Thursday, president Emmanuel Macron expressed “the solidarity of the entire nation with the victims of the families touched by the attack in Strasbourg”.

Following the attack, prime minister Édouard Philippe announced that 1,300 more soldiers would be assigned to the anti-terrorist Opération Sentinelle.

The German federal prosecutor has opened an investigation into the incident “because of the importance of the event” and the presence at it of “Germans who were not wounded but traumatised”.

1 George Floyd: police crack down forcefully as protests sweep US
2 Quarantine will cease within fortnight, Ryanair CEO claims
3 Irish tourists excluded from visiting Greece as country begins its tourism season
4 ‘I have no faith in the Catholic Church but I prayed when I’d Covid-19’
5 Coronavirus: Global cases pass 6 million as death toll reaches more than 369,000
Real news has value SUBSCRIBE