Why Brexiteers forgot about the Border 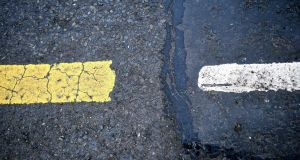 Invisible Border? A change in road markings marks where the Border lies outside Middletown in Co Armagh.

The Brexit looming before the UK today looks nothing like the Brexit promised in 2016. The goalposts have shifted, negotiations have been arduous and the biting realities of trade have crept up on Britain’s lawmakers. In truth, there is now as strong an argument for revoking article 50 as there is for continuing down the path laid out by Theresa May’s withdrawal agreement.

As a former Brexit campaigner, I find much to reflect on. I take the view that central to the unravelling of Brexit has been the Irish Border, whose frictionless state is informally tied to the ambitions and objectives of the 1998 Belfast Agreement. Those of us who made the case for leaving the European Union did not sufficiently take into account the interests of Northern Ireland, nor indeed did we estimate the significance of the role played by the Border within the Brexit negotiations.

As historical errors go, this is pretty large. And an error it most definitely was. An argument is often presented by Remainers that the Leaver exclusion of Northern Ireland from Brexit discussion before and during the referendum was a deliberate, strategic decision. I do not buy this. I think the omission of Northern Ireland from Leaver thinking was far less conscious and, in some ways, symptomatic of a much wider political issue.

One reason remains that until two years ago, British people, activists and politicians simply did not need to think or know very much about the workings of international trade. European Union membership had for years meant that trade policy was outsourced to Brussels, with little thinking behind moulding it in Westminster. The intellectual atrophy born out of this will have had a major impact on pre-referendum thinking, and certainly any need for extensive consideration of customs and third-country controls.

Some of the worst poverty in the UK happens to be located in Northern Ireland, where it is left undiscussed and untouched

Another reason might well have been down to the fact that in Britain, political discourse routinely ignores Northern Irish interests. Being that it is geographically, historically and constitutionally separate from England, Scotland and Wales, there is a tendency to treat Northern Ireland as a sort of unwanted child, with rare mentions of Northern Irish public policy usually raised as a sort of marker for comparison with Britain rather than as part of wider discussions of reform.

Newsworthy events which take place in Northern Ireland are seldom covered in Britain, for one reason or another. Some of the worst poverty in the UK, for instance, happens to be located in Northern Ireland, where it is left undiscussed and untouched. Debate surrounding improving infrastructure and transport systems in British parliamentary and policy circles typically focuses on London, with occasional mentions of the home counties. It never addresses the drastic need for investment in Northern Ireland.

On a psychological level, such exclusion probably filtered down into the minds of quite a lot of ordinary voters leading up to the referendum. It certainly did mine, being that one of my huge failings of the past three years was to simply not think about the impact of the Border on the merits of leaving the EU. Of this I am immensely disappointed and rather ashamed. What started out as a topic almost never discussed, and when mentioned dismissed, eventually became the cornerstone of the agreement eventually shaping Brexit policy.

Some months before the referendum, I spent time horseshoeing my way round the south, east and west coastline of England, taking part in street activism and getting a feel of public opinion. I do not remember the Border coming up once in conversation with the people I spoke to. Typifying the British political attitude towards Northern Ireland, so absent was the issue that it could not have been anything other than honest ignorance based on learned exclusion.

Inside Vote Leave, too, a very similar observation could be made. The Border not only played no part in campaign messaging, being that it was largely technical and thus not very politically sellable, it was also seldom mentioned in the office. This I point out not as an attack upon anybody (indeed, my own ignorance is partly to blame), but in order to capture the extent to which the Border just did not feature in Leaver thinking and discourse.

The big Brexit dream was brought to its knees thanks to one of the UK’s most persisting political ailments: its tendency to ignore the interests of Northern Ireland

One night, I want to say sometime around the end of May 2016, BBC Newsnight – to be hosted by James O’Brien that evening – rang us at Westminster Tower to ask for a representative to go on that night to debate the effects of Brexit on the Border. Nobody in the office was keen to take up the request, with even our more polished and experienced media performers rejecting the opportunity on the grounds that they simply lacked real knowledge of the issue.

I remember quite vividly the feeling of unease and discomfort about the prospect of us talking about something we just didn’t feel needed addressing. Of course, I would not have been much use myself, given that the most thought I had afforded the topic was simply to dismiss any suggestion that the North-South peace process would be halted as yet more Project Fear. I now realise this was naivety on my part. I should have considered things more carefully.

And so we are where we are. The big Brexit dream was brought to its knees thanks to one of the UK’s most persisting political ailments: its tendency to ignore the interests of Northern Ireland. Historical accounts of the future will do well to emphasis this somewhat uncomfortable fact.

Oliver Norgrove is a former Vote Leave staffer, and student in elections, campaigns and democracy