The outlook for vaccination is better than it seems

Europe Letter: Ireland and other EU countries believe they can catch up with the UK 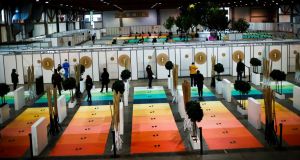 People wait to be vaccinated with the AstraZeneca coronavirus vaccine, foreground, as others rest after being vaccinated, background, at the Brussels Expo vaccination centre. Photograph: Francisco Seco/AP Photo

Based on the current delivery schedule provided by pharmaceutical companies, Ireland believes its vaccination campaign can catch up with Britain’s or come close to it.

Some other European Union member states say the same: that they should be able to vaccinate all or almost all of the adults who want a vaccine by the end of June, similar to the UK’s target of July 31st.

Can they do it? It depends on two things: pharma companies following through on deliveries, and national rollouts ramping up to match.

The Irish Government’s announcement of its vaccine schedule this week was overshadowed by a report of the extent of AstraZeneca’s delivery shortfall. This was actually already factored into the Government plans, but it made the news because the precise figures hadn’t been public before, creating a false perception of a new delay.

Trust in rollout plans has been badly affected by brutal political games around vaccination. Boris Johnson’s government has used it to retrospectively justify Brexit and distract from one of the world’s highest Covid-19 death rates. Some regional authorities in Italy who are loudly complaining of vaccine shortages are doing so to disguise their own slow rollout, newspaper Il Foglio reports. A larger game of blame ping-pong plays out between national governments, the European Commission and big pharma

But the news is not all bad. Ireland’s plan to give 82 per cent of adults at least one shot by June is possible because Pfizer and Moderna have increased their deliveries, and Johnson & Johnson’s one-shot vaccine is expected in spring (it applied for approval from the European Medicines Agency last week, and a decision is expected soon). AstraZeneca also says it is working to fulfil its original delivery schedule, so it’s possible there could be more doses than expected.

However, not every member state will be able to meet a June or July deadline, which is why the overall EU target is 70 per cent of adults to be vaccinated by September 21st.

Nations will diverge because although the 27 negotiated as a block, governments chose to buy different amounts of vaccines during the negotiation rounds, and national preparation varies widely.

Each EU country was offered a quota of doses in proportion to their population size. But it wasn’t mandatory to take them, and some member states turned down doses, favouring the cheaper AstraZeneca over the more costly and less familiar Pfizer and Moderna vaccines. Countries such as Denmark and Germany then bought up doses that other countries turned down. Ireland took its full quota, buying enough jabs to vaccinate the population twice.

It’s early days, but initial figures suggest that small and highly-organised states have an advantage in doing a quick rollout. Many European countries are federal, and when powers are divided between national and regional authorities, such a task can be complex.

For example in Brussels, just 3,000 of 11,000 primary care workers showed up for their vaccine appointments, local media reported this week. The federal authority sent the invitations, but the regional authority is in charge of administering the shots. It can’t access the data, and doesn’t know whether the patients didn’t show up because they had already received vaccines, due to faulty invites, or because they didn’t want to.

In several EU countries, Pfizer or Moderna vaccines are favoured by some because they are perceived to be “better” than AstraZeneca. This was reflected in recent calls by Irish health unions that frontline workers should be given the mRNA jabs, something that also happened in France.

The poor perception exists because AstraZeneca’s initial trial data was messy, with few older participants, and several national authorities advised that due to a lack of data it should only be given to younger groups. It has yet to receive approval in the United States. But mounting evidence confirms that AstraZeneca is a highly effective vaccine.

Reports about vaccine hesitancy towards AstraZeneca madden people in Ireland who are impatiently waiting to be called for a jab. There is a misconception that there are boxes of unused vaccines sitting around in other European countries that the Irish Government could buy.

But the opportunity to buy unwanted doses came and went in the negotiating rounds with pharma companies. These days, governments want all the doses they can get. They would focus on persuading people to take them or offer them to younger groups if they have extra, rather than selling them abroad.

Ultimately, there will be boxes of spare, unwanted vaccines in storage however. But at that point Europeans will already have been vaccinated: the EU has ordered enough doses to vaccinate the whole bloc several times over.