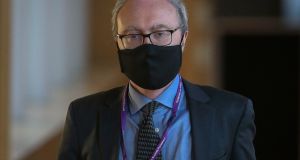 Responding to an urgent question in the Scottish Parliament, Lord Advocate James Wolffe said he was not consulted before the public prosecution service, which he heads, ordered that some of Mr Salmond’s written evidence to the committee of inquiry should be redacted.

“No I was not. The decisions in relation to this matter were made by senior professional prosecutors acting independently as they always do and without reference to the law officers. Scotland’s public prosecutors take difficult decisions that some may find unpopular. They take those decisions objectively, professionally and in the public interest and they act independently of any other person,” he said.

The Scottish government’s investigation into sexual harassment complaints against Mr Salmond led to a £500,000 legal bill after a judicial review found it to have been “tainted by apparent bias”. He was later charged with 13 counts of sexual assault but was acquitted of all charges in court last year.

Mr Salmond cancelled a planned appearance before the committee on Wednesday after the Crown Office, as the public prosecution service is called, ordered the redaction of parts of a written submission in which he accused Ms Sturgeon of misleading parliament and some of her circle being part of an effort to damage him.

Opposition parties have accused of threatening the freedom of parliament to conduct its business without interference from government agencies but Mr Wolffe said the Crown Office had no interest in limiting the conduct of proceedings in this parliament.

“Its only interest is securing observation and compliance with an order of the high court with which we are all obliged to comply whether in this parliament as otherwise. As with any anticipated publication which may amount to contempt of court, the crown considered whether it should raise concerns with parliamentary authorities, it took the view that it should,” he said.

“It was ultimately a matter for the parliamentary authorities taking their own legal advice to determine what they should or should not publish. The crown having raised the concerns which it has raised has exhausted its interest in this matter and has absolutely no interest in otherwise limiting the activities or conduct of business in this parliament.”

Mr Salmond is now expected to appear before the parliamentary committee on Friday and Ms Sturgeon will give evidence as the final witness next week. The first minister said it was “downright wrong” to suggest that the Crown Office came under political influence to order that Mr Salmond’s evidence should be redacted.

“There’s no good reason why isn’t sitting in front of the committee right now. And I understand he said he’ll go later in the week, let’s hope he does, and then we can get all this out in the open, all of it on to the table. I’ll have my say next week. And then people can make up their minds.”