While United Russia party has fallen from popularity, barriers keep rivals from election 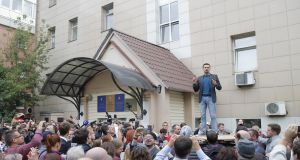 On a rainy Moscow evening last week Russian opposition politician Ilya Yashin was addressing an enthusiastic crowd outside the Krasnoselsky district election commission where officials are examining his bid to stand in a poll for the city legislature this September.

“Citizens must decide who represents them at elections, not bureaucrats in their offices,” he yelled to his supporters from the roof of a parked car. “I’m going inside now to tell them that you’ll return to protest if I don’t get my approval.”

The official campaign for the Moscow City Duma election – one of more than 40 Russian regional parliament and gubernatorial polls to be held on September 8th – has yet to begin, but opposition hopefuls like Yashin are already locked in a heated battle just to get their names on the ballot paper.

They accuse the election authorities of setting near-unsurpassable barriers for entry to the election and playing tricks to keep unwelcome competitors away.

Putin’s public approval ratings have dipped over the past year while those of his government and the Kremlin’s United Russia party have tanked following a series of unpopular measures from an increase in the retirement age to higher taxation.

As living standards fall, many Russians have come to the conclusion that the political system Putin has built over the past 19 years is no longer capable of renewing itself or delivering positive change. Across the country people have been joining protests to vent their grievances and get their voices heard.

United Russia holds 28 of the 45 seats in the outgoing Moscow Duma and would like to retain control of the city legislature. Sergei Sobyanin, Moscow’s longstanding mayor and Putin ally, also has an interest in retaining the status quo. An unfriendly Moscow Duma could question the city’s massive budget spending or pass a damaging vote of no confidence in the mayor.

However, with the current political mood, the United Russia brand has become a toxic liability. Avoiding the risk of humiliation, the ruling party has decided not to participate openly in the Moscow Duma poll and is instead promoting nominally independent candidates known to be Kremlin loyalists.

Genuine independents have struggled to collect the thousands of voter signatures required before election commissions can register them for the ballot. With many Muscovites away on summer holidays, door-to-door canvassing is often unrewarding.

But that’s only the start of the problems. Volunteers have complained that their stands have on several occasions been attacked by unidentified assailants tearing up banners and scattering promotional leaflets. In a particularly abusive incident last month, a group of masked men threw horse manure at canvassers working for Lyubov Sobol, an ally of Russian opposition leader Alexei Navalny, who is battling to get her name on the ballot in central Moscow’s 43rd district.

Preparations for the election moved into the critical stage last week as district election commissions began verifying voter signatures – a 10-day process that will decide which candidates make it to the ballot.

Yashin failed to pass the signature threshold to compete against Sobyanin in the Moscow mayoral election last year and is braced for another defeat as officials scrutinise his application to stand for the city Duma. “It’s a dishonest game being played in a fraudulent and very brazen way,” he said.

With only a short time left before the final list of candidates is announced, opposition activists are piling pressure on the authorities to hold a competitive election. A group of independent municipal council deputies have been organising one-man pickets – larger unauthorised demonstrations are prohibited by Russian law – to demand the registration of all opposition candidates.

Among those picketing last week was Denis Shenderovich, a municipal councillor in Moscow’s Kuntsevo district, who has failed to meet the requirements to register for the upcoming city Duma election. “Twenty one days to collect 6,000 signatures. Honestly it wasn’t possible,” he said. “It’s sad. We need competitive elections. Change is only possible if new people come to power.”