Police fired tear gas and turned water cannon on protesters in Paris on Saturday (November 24) who are angry over rising fuel costs and President Emmanuel Macron's economic policies, in the second weekend of "yellow vest" protests across France. 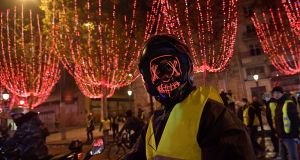 A masked yellow vest protester on a scooter near The Arc de Triomphe on the Champs Élysées in Paris on Saturday evening. Photograph: Bertrand Guay/AFP/Getty Images

Shouts of “Macron resign!” and “Macron get lost!” punctuated the booms from tear gas and water cannons on the Champs-Élysées on Saturday, as French police forced protesters from the “Yellow Vests” movement away from the presidential offices in the Élysée Palace.

Welling up rapidly from rural and forgotten France, this broad-based, citizen-driven movement is among the most serious challenges yet to President Emmanuel Macron’s pro-business government, say analysts, political opponents and even many of Macron’s supporters.

On Saturday, thousands of the “gilets jaunes”, or Yellow Vests, named for the fluorescent road-safety vests that all French drivers must carry in their vehicles, converged on Paris for a second weekend to protest a rise in fuel taxes and to express general discontent with the fiscal burden in one of the most highly taxed states in Europe, where taxes represent over 45 percent of GDP.

The numbers had dropped sharply from the preceding week’s several hundred thousand protesters; police estimated there were about 8,000 in Paris and more than 80,000 across the country on Saturday.

Clouds of gas and smoke rolled up the Champs-Élysées all afternoon as police battled militant members of the crowd wielding paving stones; the grassroots protesters insisted they were unconnected with their movement.

“We’re just fed up. It seems like to us that the government is only working to maintain its own privileges,” said Mathieu Styrna, one of the thousands marching. A contractor, he said he had been forced to drive hundreds of miles a week for work and could no longer afford his gas bills.

It is the movement’s amorphousness that makes it new, powerful and potentially dangerous for Macron, analysts say. “The government parties didn’t understand that their tax policies would wind up producing this,” said Dominique Reynie, a political scientist at Sciences Po, saying the tax burden had grown by about €25 billion every year between 2002 and 2017.

No high-ranking official has met with any of the self-designated spokespeople for the movement who have been appearing on French television all week. There have been a few small fiscal gestures – promises of checks and rebates – but these were dismissed by Saturday’s protesters as irrelevant to their daily struggle.

“It’s going to trigger a civil war and me, like most other citizens, we’re all ready,” said Benjamin Vrignaud, a 21-year-old protester from Chartres.

Mr Macron has insisted that the fuel tax rises are a necessary pain to reduce France’s dependence on fossil fuels and fund renewable energy investments, which is a cornerstone of his reforms of the nation. He will defend fresh plans to make the “energy transition” easier on Tuesday.

A man caused a dramatic stand-off with police on Friday when he donned a neon vest and brandished an apparent grenade at a supermarket in the western city of Angers. He was later arrested. – New York Times/AP