Activist and broadcaster assassinated in Syria 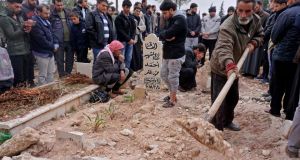 Mourners attend the funerals of Raed al-Fares and Hammoud al-Juneid in Kafranbel in the northwestern province of Idlib. Photograph: Muhammad Haj Kadour/AFP/Getty Images

The unidentified gunmen shot Raed al-Fares, along with his friend Hamoud al-Juneid, in the town of Kafranbel, home to the Radio Fresh station, the British-based Syrian Observatory for Human Rights said.

Fares gained prominence early in the uprising against Mr Assad, which began with mass demonstrations in 2011 and slid into civil war, with protest banners that drew international attention on social media.

The banners targeted Mr Assad, his ally Iran, western powers that Fares portrayed as selling out ordinary Syrians through their response to the crisis, and the jihadist militants who had emerged in the chaos.

Fares also distributed photographs and video clips showing the toll that war was taking in Kafranbel, providing a picture of life in rebel-held parts of Syria where it was dangerous for foreign media to visit.

In 2014, Islamic State gunmen shot him in the chest but he survived. By his own account, his offices were targeted both by government bombardment and by jihadists, who abducted and tortured him several times.

In an opinion piece in June in the Washington Post, calling for the United States to resume financial support for Radio Fresh, Fares wrote that “the terrorist groups (and the regime) see us as a direct threat”.

The jihadist Tahrir al-Sham alliance is the most powerful of several groups present in Idlib province. A Russian-Turkish deal to prevent further fighting in northwest Syria, the last rebel stronghold, has for now averted a planned government offensive.

The observatory has reported a succession of assassinations in Idlib over the past year targeting leaders from the area’s major factions and political dissidents who publicly disagree with their governance. – Reuters