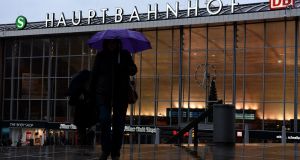 The main train station in Cologne, western Germany, where a Syrian national was attacked by eight men. Much of the New Year’s Eve violence against women took place at the station. Photograph: Patrik Stollarz/AFP/Getty images

Almost two weeks on, more than 500 women have filed criminal complaints with Cologne police, saying they were robbed or were victims of physical and sexual assaults by gangs of foreign national men, many believed to be asylum-seekers.

Local police said they were aware of four separate revenge attacks with an “anti-foreigner” element.

The first took place early on Sunday evening when 25 men chased a man of African appearance who sought protection from a group of six Pakistani men.

“The pursuers then beat and kicked these young Pakistani men too,” said Norbert Wagner of Cologne police crime division.

Cologne’s Express newspaper reported that groups of hooligans and bikers arranged on Facebook to go on a “manhunt” in Cologne on Sunday night to “clear the place out”.

None of the perpetrators of the attacks have been caught but police have questioned 153 people since Sunday. Some 13 are known to police for far-right offences while another 18 had ties to the city’s biker gangs or worked as doormen in Cologne.

It was a different scene yesterday at Berlin’s central station, where a group of asylum-seekers handed out flowers to women passersby in a conciliatory gesture.

“We want to express our anger at what has happened, our anger at criminals who rob others of their freedoms,” said Mr Khalid Ghazi, recently arrived from Syria.

Tempers flared at an emergency hearing in Düsseldorf of the state parliament of North Rhine-Westphalia, where officials blamed Cologne police for the New Year’s Eve chaos.

“Cologne police should have reacted to developments and drawn on additional available reinforcements on New Year’s Eve,” said Ralf Jäger, interior minister in North Rhine-Westphalia.He criticised police for creating the impression in their statements “that something was being covered up” and for making traumatised women wait hours in police stations before they could file criminal charges.

In Berlin, leaders of the ruling grand coalition have presented new measures, in particular a rule obliging asylum seekers to reside in one city or region to prevent a concentration of non-nationals.

Meanwhile, Swedish prime minister Stefan Löfven has condemned the cover-up of sexual assaults by migrant youths at the “We Are Sthlm” music festival last August. According to a leaked police reports, around 50 suspects carried out assaults on teenage girls at the festival.

“It’s a double betrayal of these young women,” said Mr Löfven, “First that it has not been prosecuted and handled in the way we would wish and, second, that police did not inform or tell about these problems.”