The city’s toxic air, classified as ‘hazardous’, is over 15 times the World Health Organisation’s recommended limit 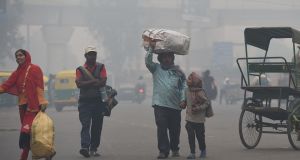 The heavy smog in New Delhi. It is likely to get worse when millions of residents illuminate their homes with oil lamps and burst firecrackers on Wednesday to celebrate Diwali, the annual festival of lights. Photograph: Getty Images

India’s capital New Delhi was enveloped on Monday in a blanket of thick grey smog that threatens to worsen when millions of residents illuminate their homes with oil lamps and burst firecrackers on Wednesday to celebrate Diwali, the annual festival of lights.

The city’s toxic air, classified by the authorities as “hazardous”, was over 15 times the World Health Organisation’s (WHO’s) recommended limit.

City traffic crawled as visibility even during the day was poor, triggering major jams, whilst locals ventured out with facemasks and handkerchiefs as feeble protection against the foul air.

Hugely expensive air purifiers installed in people’s homes were ineffective as the authorities warned the city’s 20 million residents to stay indoors as much as possible.

“It’s suffocating and noxious wherever I go,” said retired colonel J P Singh. “My eyes water continually even inside my house due to the pollution that shows no sign of abating ... Diwali is bound to make it much worse.”

Last week India’s supreme court had restricted the time for setting off crackers on Diwali to just two hours on Wednesday evening, but environmentalists believe this restraint will be difficult if not impossible to enforce. The court permitted the use of “green” or non-polluting firecrackers, but many conservationists claimed no such products existed in India.

According to the federal government’s System of Air Quality and Weather Forecasting and Research, levels across Delhi of PM2-particles linked to higher rates of respiratory ailments, lung cancer and heart disease, averaged about 343, compared to safe levels of 30-40.

City doctors claimed the number of patients with respiratory ailments had surged, and they expected numbers to rise over the next few weeks.

Delhi’s air normally worsens with the onset of winter, with the cold air trapping smoke and pollutants in cooling temperatures closer to the ground. However, pollution over the past few years has been dire as farmers in the neighbouring states of Punjab and Haryana burnt their crop stubble after the paddy harvest, ahead of planting wheat in November. Fine dust, sand and cement particles from construction sites added to the pollution.

Social media and television news channels were displaying dramatic pictures of the city to highlight the pollution menace and to goad the authorities into taking some measures to alleviate it.

According to WHO, India is home to 14 of 15 of the world’s most polluted cities, with Delhi ranked sixth.

“Over 11 months of the year Delhi’s air quality is poor, but the authorities are doing nothing about it even though Delhi’s chief minister Arvind Kejriwal routinely refers to the city as a gas chamber,” said Seema Mustafa of the Centre for Policy Analysis in Delhi.

She said each year pollution became unbearable from October onwards, but the federal and Delhi governments had neither the skill nor the political will to deal with this menace.

Delhi’s pollution has prompted a large number of embassies to reduce the tenures of their diplomats from three to two years, in addition to giving them the option of returning if any of them or their family members become victims of the noxious pollution.