Sweden to close border with Norway after Oslo locks down 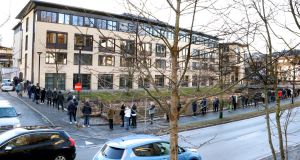 A queue outside a shop selling alcohol in Sandvika, Norway, as such shops were ordered to close in Oslo after the discovery of the British coronavirus variant. Photograph: Ørn E Borgen/EPA

Sweden is closing its border with Norway after the government in Oslo introduced its strictest measures of the Covid-19 pandemic so far following several deaths close to the Norwegian capital from the more contagious variant first discovered in the UK.

Anders Damberg, interior minister in Stockholm, said on Sunday that the border to Norway would be closed until mid-February. Similar bans will be in place with Denmark and the UK, both due to the new variant.

Norway, Denmark and Finland all closed their borders to Sweden last year as they fretted about its much higher coronavirus infection and death rates, leading to warnings by ministers in Stockholm, including Mr Damberg, about the risks to Nordic co-operation.

Both Denmark and the region around Oslo have now locked down a second time due to concerns about the spread of the variant first found in the UK, which UK prime minister Boris Johnson has warned may be deadlier.

Norwegian prime minister Erna Solberg said she had “no complaints” about Sweden’s decision to close the border. People who live or work in Sweden, those transporting goods and those with urgent family reasons will all still be allowed to enter from Norway.

Norway’s centre-right government on Saturday ordered all shops except for food stores, pharmacies and petrol stations closed in the capital and nine nearby municipalities. It moved all schools and kindergartens in the same region to the so-called red level, which means class sizes are made smaller and local authorities can shut them if needed.

Norwegian authorities moved quickly after it emerged on Friday that two deaths in a care home 20km south of Oslo earlier in January involved the more contagious variant of coronavirus.

Norway has been one of the least affected countries in Europe by Covid-19, with low infection and death rates. Health authorities and the government have been credited with taking rapid decisions both to close down and reopen society.

But the latest restrictions come only five days after Norway became one of the first European countries to ease its restrictions from the first wave. Children’s sports and leisure activities that were allowed to restart on Thursday were halted again on Saturday in Oslo and the other nine municipalities.

“This is a very serious situation and we must do everything we can to stop the outbreak,” Norwegian health minister Bent Hoie said, speaking from his winter cabin.

He said that the measures were the strictest since Norway initially locked down on March 12th last year and in some areas “we are going even further”.

He added: “We are doing what we can now to stop this outbreak with powerful measures, so that we can quickly regain control and ease the most intrusive restrictions. Together we have managed to beat down the virus several times, and together we can manage it again.”

Norway, with a population of 5.3 million, has the lowest death rate per capita of any European country, with 544 Covid-19 fatalities during the pandemic. That compares with 11,055 in neighbouring Sweden, which has double the population and eschewed a formal lockdown.

The current restrictions will initially last to the end of January as authorities gauge how far the variant has spread. Norwegian state TV NRK reported on Sunday that authorities had not found the more contagious variant in hundreds of tests over the weekend.

Some local politicians in and around Oslo have criticised health authorities for how long it has taken to test samples for the new variant. The samples that led to the lockdown were taken on January 3rd.

There is no curfew or bar on movement in Oslo, although Norway’s government recently asked for the legal power to introduce one if necessary. – Copyright The Financial Times Limited 2021