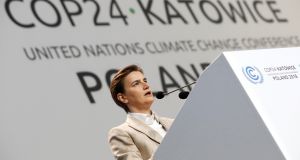 Serbia has warned that it could send its military into Kosovo if the mostly ethnic Albanian state’s planned new army posed a threat to its Serb minority.

Tension between the Balkan neighbours has risen again since Kosovo imposed a 100 per cent tax on imports from Serbia last month, and announced plans to pass legislation next week to turn its security forces into a fully-fledged army.

“I hope that we will never have to use our army, but at the moment it is one of the options on the table because we cannot stand aside and watch a new ethnic cleansing [of Serbs],” Serbian prime minister Ana Brnabic said on Wednesday.

About 200,000 Serbs fled Kosovo after a 1998-9 war between Belgrade’s forces and separatist rebels, in which some 10,000 Kosovar Albanians were killed and 700,000 driven from their homes; the country declared independence in 2008.

Deputies in 90-per cent ethnic Albanian Kosovo plan to vote on the issue on December 14th, and Ms Brnabic said Belgrade feared that “contrary to everything normal, all the agreements”, Pristina would “create an army and on December 15th move to subjugate people only because they are Serbs”.

Such rhetoric is dismissed as scaremongering by leaders in Kosovo, which hopes eventually to join the European Union and still hosts about 4,000 Nato-led peacekeepers.

“We will not create the army for the north, it is a pure lie,” Kosovo prime minister Ramush Haradinaj said, referring to mostly Serb-inhabited areas of his country that directly border Serbia. “Our army will serve in Afghanistan and Iraq to help world peace.”

“Such a move is ill-timed. It goes against the advice of many Nato allies and may have serious repercussions for Kosovo’s future Euro-Atlantic integration. At the same time the new tariffs introduced by Pristina create new divisions. Such steps are making the EU-mediated dialogue between Belgrade and Pristina even more difficult.”

Kosovo imposed the 100 per cent tariff on Serbian imports in reaction to what it called Belgrade’s efforts – backed by major ally Russia – to undermine its independence and prevent it joining many multinational organisations.

Mr Haradinaj has rebuffed EU and US calls to lift the tax, and warned that it would remain “for as long as it takes for Serbia to recognise Kosovo, for us to get a comprehensive agreement that contains everything – recognition, UN membership, agreement on debts, pensions, missing persons and the removal of tariffs”.

Recent debate over whether a land swap could help the neighbours normalise their relations has also fuelled fears of a new round of Balkan instability and border disputes.