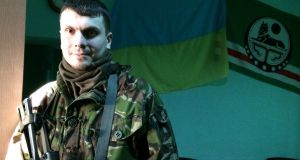 Adam Osmayev, an English-educated Chechen commander of a Ukrainian volunteer battalion, at its base in Lysychank, eastern Ukraine in 2015. He is in hospital recovering from the attack. Photograph: Dan McLaughlin

Kiev officials believe Moscow was behind a dramatic assassination attempt on a British-educated Chechen who has fought against Kremlin-backed militia in eastern Ukraine since being cleared of plotting to kill Russian president Vladimir Putin.

Adam Osmayev was shot by a man posing as a journalist for French media before Mr Osmayev’s wife, Amina Okuyeva, drew her own gun and shot the attacker several times. Both men are now recovering in a Kiev hospital after surgery.

Ms Okuyeva said that before Thursday’s attack, she and her husband had already met the supposed journalist three times to discuss what he described as plans for a series of interviews with the couple.

“We were fooled somehow. It was our fault. You can never let your guard down,” she told local media, describing how they had been sitting in the back of a car – it is not clear whose – when he had shown them a box he had brought with him.

“He said it was a gift from his office that we would like. He opened the box, I saw it was a Glock [pistol] and then he pulled it out and started shooting Adam,” recalled Ms Okuyeva, who has served as a medic at the front.

Ms Okuyeva said she had swiftly drawn her own gun – which she was given as an award by Ukraine’s interior minister – and fired at the attacker.

“Everything was automatic, like a moment in a dream . . . He started shooting at Adam, not at me, maybe he didn’t know that I was armed, and I immediately pulled out my gun. He turned out to be a coward – after he was hit a few times he started shouting ‘I give up, I give up!’ and we shoved him out of the car and knocked his weapon away. Then Adam got out of the car and fell down.”

Zoryan Shkiryak, a senior adviser at Ukraine’s interior ministry, said evidence found at the scene and preliminary information about the attacker left “no doubt that this heinous crime was planned and prepared by the Russian special services.”

Ukrainian media identified the attacker as a man who was questioned about the 2009 murder in Vienna of a critic of Chechnya’s brutal pro-Kremlin leader Ramzan Kadyrov, but this was not immediately confirmed by Kiev officials.

The son of a former oil executive in Chechnya who fell foul of Mr Kadyrov, Mr Osmayev was educated at Wycliffe College boarding school and the University of Buckingham in England.

Having earlier been accused of planning to kill Mr Kadyrov, in 2012 he was arrested in the Ukrainian city of Odessa for allegedly plotting to murder Mr Putin.

Mr Osmayev denied all the claims, but he was freed from pre-trial detention only after a 2014 revolution brought pro-western forces to power in Ukraine.

He told The Irish Times in 2015 that he had joined a Ukrainian sabotage unit the day after his release in November the previous year, and became its leader three months later when another Chechen commander was killed in battle.