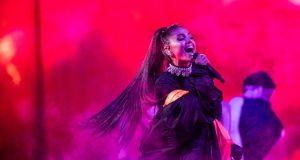 Ticketmaster set aside free tickets to a benefit concert fronted by Ariana Grande for 14,200 people who were at the singer’s Manchester Arena gig. Photograph; Chad Batka/The New York Times

More than 10,000 “opportunists and touts” tried to get free tickets for this weekend’s One Love Manchester concert, even though they were intended for those affected by the Manchester bombing.

Ticketmaster set aside free tickets to a benefit concert fronted by Ariana Grande for 14,200 people who were at the singer’s Manchester Arena gig when the bomb went off. A small number of tickets were also offered for sale with a face value of £40.

But the company said “more than 25,000 people” had logged on to its system to claim a place at the event, indicating that many were seeking tickets to which they were not entitled, potentially in a bid to resell them for profit.

A spokeswoman for Ticketmaster said: “Sadly, over 10,000 unscrupulous applications have been made.”

Secondary ticketing sites Seatwave, Get Me In, Viagogo and Stubhub have all pledged not to allow the reselling of tickets on their websites, while eBay said it would immediately remove any listings attempting to profit unfairly from the terror attack.

One eBay seller was trying to offload four tickets for £1,250, which would net a potential profit of nearly £1,100.

Ticketmaster added it was “doing everything we can – including extending today’s deadline – to ensure that tickets go to the actual fans and not the opportunists or touts who have also been applying for free tickets”.

However, some fans on Thursday were complaining that they were not eligible to register for free tickets for Grande’s One Love Manchester event this weekend because they had bought tickets to the original gig from listings on resale sites such as Ticketmaster’s GetMeIn, which meant they had no original purchase information to prove they were there.

Ticketmaster and LiveNation, its parent company, stopped allowing fans who were at the concert on the night of the bombing to register for free tickets to this Sunday’s charity concert at 10pm on Wednesday night. They later acknowledged issues in verifying who had attended, and reopened the online service for fans until 2pm on Thursday.

“We want to give all fans who were at the show, regardless of where they bought their tickets, every opportunity to register for One Love Manchester,” said a Ticketmaster spokeswoman. “We worked through the night and verified thousands of original bookings, although there were some we could not verify.”

Some fans could still find it hard to get their free tickets to the event, which is to be held at Old Trafford cricket ground, as Ticketmaster still wants information that many who have used resale sites are struggling to obtain.

These companies [that originally purchased the tickets] can claim these [free] tickets they are not entitled to, and resell them all over again

One fan told the Guardian she bought tickets for herself and her two daughters from Viagogo as a Christmas gift because the main ticket sellers had sold out, but now she cannot get free tickets because the details required by Ticketmaster are held by the original purchaser.

“My tickets were originally bought by a travel company specialising in music event travels,” she said. “I then paid £100 for a £45 ticket on Viagogo. These companies [which originally purchased the tickets] can claim these [free] tickets they are not entitled to, and resell them all over again. We’ve escaped with our lives the horror of the terror attack and now I find I will not be able to take them.”

Only about 9,000 fans of more than 14,000 who attended the original concert have received tickets for the charity gig.

It is not clear how many have decided not to go and how many want to go but have been unable to pass Ticketmaster’s verification system.

The official £40 tickets went on sale at 10am on Thursday on the Ticketmaster and LiveNation websites, with buyers given the option of donating more money to the We Love Manchester emergency fund.

“Ticketmaster was unsurprisingly met with remarkable demand for One Love Manchester tickets we had on sale this morning; 140,000 fans were on the website and our call centre was buzzing,” said the spokeswoman. “With over 450,000 searches on our site for One Love Manchester over the last 24 hours, demand was always going to be extremely high. We are happy to report that there are thousands of fans who successfully purchased tickets during the general sale.”

Ticketmaster said the event, which will be attended by about 50,000 people, sold out in minutes. An allocation has been kept aside for those who qualify for free tickets.

The gig will be broadcast on BBC television. ITV has rescheduled the final of Britain’s Got Talent, moving it from Sunday to Saturday night, so as not to “distract from an important cause”, a spokesperson said. The British Soap Awards, which were scheduled for Saturday evening on ITV, will be broadcast on Tuesday night.

The performers have all waived their fees, and organisers hope the show will raise at least £2 million for the emergency fund, which was set up by Manchester city council and the British Red Cross after the attack on May 22nd, which killed 22 people and injured 116.

Manchester’s cinemas have come together to use screenings of the Hollywood blockbuster Wonder Woman to raise money for the emergency fund.

More than a dozen cinema sites will donate ticket takings from the screenings – distributor Warner Brothers will also hand over its share of the box office – and all revenue from advertising run around the films will also be given to the fund.

It is not the first time resale sites have been criticised for seeking to profit from events organised to raise money for charity.

The Switzerland-based Viagogo was accused of “moral repugnance” after reselling tickets for an Ed Sheeran gig in aid of the Teenage Cancer Trust and was branded “callous” for cashing in on a charity event featuring the comedian Peter Kay.

The company also drew fire from MPs after refusing to turn up for a select committee inquiry into the ticketing market, in an almost unprecedented snub to a parliamentary evidence session.

The company was accused of “naked mis-selling and fraud” in its absence, amid complaints from fans who have said they are being overcharged, or refused entry to events having bought tickets through the website.