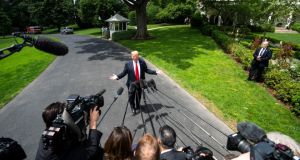 Donald Trump: “I hope it’s not so, because if it is, there’s never been anything like it in the history of our country.” Photograph: Jim Lo Scalzo/EPA

Donald Trump escalated his attack on his intelligence services on Wednesday, warning that the FBI’s alleged covert contact with his 2016 election campaign could become “one of the biggest political scandals in history”.

In a series of early-morning tweets the American president referred to the “Criminal Deep State”, which he said had gone after “Phony Collusion with Russia” and a “made up Scam” and was now embroiled in “a major SPY scandal the likes of which this country may never have seen before”.

Mr Trump was referring to unsubstantiated allegations that an FBI source met three Trump-campaign officials during the presidential race as part of the agency’s investigation into Russian interference in the election.

On Monday the US deputy attorney general, Rod Rosenstein, said that the department of justice’s inspector general, who is already examining the FBI’s surveillance of the former Trump aide Carter Page, would also look into the new allegations to see if there was any improper contact during the campaign.

President Trump and his supporters have seized on the allegations as proof that the FBI is biased against him.

Look how things have turned around on the Criminal Deep State. They go after Phony Collusion with Russia, a made up Scam, and end up getting caught in a major SPY scandal the likes of which this country may never have seen before! What goes around, comes around!

Facts matter. The FBI’s use of Confidential Human Sources (the actual term) is tightly regulated and essential to protecting the country. Attacks on the FBI and lying about its work will do lasting damage to our country. How will Republicans explain this to their grandchildren?

As he prepared to leave Washington for New York, where he was due to take part in a round-table meeting on immigration, Mr Trump doubled down on his earlier comments.

“It looks like a very serious event. But we’ll find out. When they look at the documents, I think people are going to see a lot of bad things happened. I hope it’s not so, because if it is, there’s never been anything like it in the history of our country,” he said, adding that former national intelligence director James Clapper had admitted the FBI had spies in the Trump campaign – a claim disputed by Mr Clapper.

Earlier in the day the former FBI director James Comey addressed the growing controversy on Twitter, saying that the FBI’s use of sources to contact the Trump campaign was legal. “Facts matter. The FBI’s use of Confidential Human Sources (the actual term) is tightly regulated and essential to protecting the country,” he said, adding that attacks on the FBI and lies about its work will do “lasting damage to our country”. “How will Republicans explain this to their grandchildren?”

The escalating row unfolded as two senior Republicans prepared to meet senior government officials at the White House on Thursday to view classified information related to the FBI’s contact with the Trump campaign. No Democrats are attending the meeting.

The Trump team is understood to be focusing on Mr Comey’s credibility as it prepares for a possible special-counsel interview with the president. Mr Trump’s lawyer Rudolph Giuliani has repeatedly lambasted Mr Comey.

Mr Trump said on Wednesday: “A lot of those great people working in the FBI, they will tell you I did a great service to our country by firing James Comey.” He also pledged to “clean everything up” at the agency.

Meanwhile, Mr Trump’s son-in-law, Jared Kushner, has had his full security clearance restored, according to reports. His security clearance was put on hold in February after the scandal surrounding the now-departed White House aide Rob Porter and his access to high-level briefings. Mr Kushner is understood to have been interviewed by special-counsel investigators in April – the second time he has been interviewed by Robert Mueller’s team.