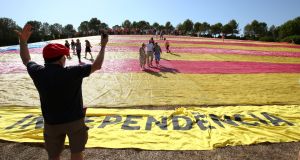 El País newspaper has labelled it “the biggest taboo in the constitution” and the Basque Nationalist Party has called for it to be eliminated altogether. One official in the Catalan regional government has even been quoted as comparing its use to “opening Indiana Jones’s Ark of the Covenant” and describing it as “dangerously unpredictable”.

All were referring to a few lines in the Spanish constitution – article 155 – that have been hogging the headlines recently and which, many believe, could be the difference between Catalonia staging a rogue referendum on independence from Spain or not.

The nationalist Catalan regional government has set a date of October 1st for the planned vote, insisting that a new, independent state will be declared within 48 hours if the result is positive.

But the central government is determined to prevent the referendum, which it deems illegal, from going ahead.

In the context of this standoff, article 155 of the 1978 constitution is seen as a last resort for the government of Mariano Rajoy should his other efforts to foil the referendum fail, allowing him to intervene temporarily and wrest back certain devolved powers from the Catalan regional administration.

The clause itself states that if any one of Spain’s 17 regions “does not carry out the duties which the constitution or other laws require it to, or acts in a way that damages the general interests of Spain, the [central] government … can adopt the necessary measures to ensure that it is made to carry out such duties, or to ensure the protection of the aforementioned general interests”.

In recent months, Rajoy has stepped around the issue in characteristically circumspect manner, but his government has been careful not to rule it out. In February, justice minister Rafael Catalá said it was “an option” and in the last few days, politicians from Spain’s two traditionally dominant parties have defended the article’s implementation.

Xavier García Albiol, leader of the Catalan wing of Rajoy’s conservative Popular Party (PP), said triggering article 155 could be “justified”, while comparing the referendum to a coup d’état. Former Socialist prime minister Felipe González seemed to concur, saying that if the law is being broken, “there has to be a response that brings the constitutional parameter back to reality.”

Yet the current leadership of the Socialist Party appears to disagree, warning that every other avenue should be explored to end the deadlock. Although party leader Pedro Sánchez has pledged support for Rajoy in opposing the referendum, the now-famous constitutional clause appears to divide the two men.

In Catalonia itself, unionist voices are calling on the government to keep it on the table.

“It would be a disaster if the law were broken and the Constitution and regional autonomy statute were violated,” Josep Bou, president of Empresaris de Catalunya, an influential business group which opposes independence, told the Irish Times. “And before that disaster takes place, everything that is at the disposal of the government, the attorney general and the constitutional court must be used.”

Much of the drama associated with article 155, which was based on a clause in the German constitution, stems from the fact that it has never been triggered, reflecting the uncharted nature of Spain’s current territorial crisis.

“It’s never been used before, not even during the worst moments of [Eta] terrorism – its use would be serious because there’s no precedent,” says Xabier Arbós, a professor of constitutional law at Barcelona University.

“The problem is that the lack of precedent means that we don’t know how far it can go.”

In addition, the vague wording of the article itself appears to make it open to interpretation. Its usage requires approval by the Senate, where Rajoy’s PP has a majority. But despite suggestions that implementing article 155 could mean the central government suspending all Catalonia’s substantial autonomous powers (the region has its own health and education system and police force, for example), the reality would probably be more specific. Madrid’s aim in using the clause would be to prevent the October referendum, therefore it might temporarily take control of schools, where many voting stations are likely to be set up.

Article 155 makes no mention of the police or armed forces. But many believe that such is its aura that, ironically, it could end up being a powerful marketing weapon for the pro-independence camp, boosting the image they have assiduously sought to cultivate in Spain and abroad of a law-obsessed state overreacting to a region’s peaceful attempts to vote.

Gabriel Rufián, a congressman for the Catalan Republican Left (ERC), which is part of the increasingly fractured pro-independence coalition governing the region, is sceptical of that stance, taking any obstacle to secession at face value.

“I don’t agree with this very minority view [among the independence camp] that the worse things get, the better for us,” he told The Irish Times.

“Having said that, we’ve managed to get the Catalan independence process talked about in the English parliament thanks to the attacks and judicial violence of the Spanish state,” Rufián said, referring to an all-party parliamentary group established in Westminster earlier this year to discuss the Catalan stalemate.

He insists the October vote will take place. Yet he believes the government has other powerful tools available to try to block the process, without Article 155, such as the fiercely unionist right-wing Spanish media and, above all, the courts. In March, the Catalan High Court of Justice barred former regional premier Artur Mas from public office for two years for organising a non-binding referendum on independence in 2014 and some of his former cabinet members have received similar sentences. Meritxell Borràs, a senior Catalan government official, is being investigated for having requested bids for the supply of ballot boxes to be used in the October referendum.

At the very least, a barrage of further lawsuits against separatist leaders can be expected between now and the end of September.

The last time Catalonia attempted to declare itself independent was in 1934, but it was a short-lived project which ended when regional premier Lluis Companys was jailed, before later being killed by the Franco regime and becoming a nationalist icon.

Carles Puigdemont, the Catalan premier, is a less charismatic figure than Companys but nonetheless one who desperately wants independence. He told The Irish Times earlier this year the Spanish state was “getting too used to reaching the limits of democratic normality and then stepping over them – talking about using article 155, talking about suspending officials from public office for allowing a vote, talking about every kind of threat.”

Soon enough he will find out exactly how far the central government is willing to go to stop him.