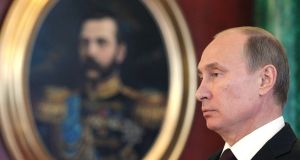 Vladimir Putin said Edward Snowden must quit hurting US interests if he wants to remain in Russia, after the American sought asylum. Photograph: REUTERS/Mikhail Klimentyev/RIA Novosti/Kremlin.

Edward Snowden has withdrawn his Russian asylum request because of the demand that he stop harming US interests by leaking secret documents as countries from Latin America to Europe brushed off his bid for refuge.

“Theoretically, Snowden could stay in the Russian Federation, but with one condition - that he give up his intention to carry out anti-American actions,” president Vladimir Putin’s spokesman, Dmitry Peskov, told reporters today. “As far as we know, he refuses to do so.”

Mr Snowden, who remains stuck in the transit area of Moscow’s Sheremetyevo airport after arriving on June 23rd from Hong Kong, will not be handed over to the US to face espionage charges because of human-rights concerns, according to Mr Peskov.

Mr Putin said yesterday that Mr Snowden must quit hurting US interests if he wants to remain in Russia, after the American sought asylum.

Mr Snowden also applied for refuge in 20 other countries, according to anti-secrecy group WikiLeaks. Poland and Germany rejected his asylum bid because it didn’t meet the requirements for political refuge.

Ireland and Austria said asylum applications are only considered when made by people inside their territory.

He said he would consider an asylum application if Mr Snowden made one.

Ecuadorian president Rafael Correa told the Guardian in an interview published today that his country isn’t considering Snowden’s request and said it was a “mistake” to have granted the fugitive a safe-conduct pass that allowed him to leave Hong Kong for Moscow.

The former worker for government contractor Booz Allen Hamilton Holding Corporation has said he was the source of leaks on top-secret US National Security Agency programs that collect phone and Internet data.

The Snowden case has rattled international relations, with US secretary of state John Kerry last week warning China and Russia of “consequences” of their actions in spurning US extradition requests.

US officials later shifted to a more conciliatory approach, and president Barack Obama said that “some useful conversations” have been held between the US and Russia to resolve the issue.