Russia and Serbia hail ties amid strained relations with West

Belgrade welcomes Vladimir Putin with a huge rally, fighter jets and the gift of a puppy 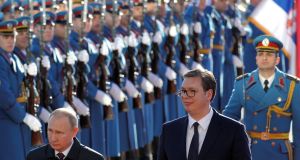 Russian president Vladimir Putin has pledged to deepen economic ties with Serbia and to support its position on Kosovo, as he visited Belgrade to help bolster the Kremlin’s dwindling influence in the Balkans.

Mr Putin gave a Russian state honour to Serbian president Aleksandar Vucic and was welcomed by tens of thousands of people at a government-backed rally on Thursday, as both states played up their relations as an alternative to tricky ties with the West.

Moscow is Belgrade’s main ally in rejecting Kosovo’s 2008 declaration of independence, while Serbia refuses to impose western-led sanctions on Russia and is the only Balkan state that is not a member of, or does not hope to join, Nato.

Belgrade pulled out all the stops for Mr Putin, whose plane was escorted by MiG-29 fighter jets donated to Serbia by Russia, and who was later hailed by crowds that included many people bussed in from the regions for the occasion.

Mr Putin was also given a puppy – at least the fourth one he has received from foreign leaders – and he pinned Russia’s Order of Alexander Nevsky on Mr Vucic’s lapel before the two men answered questions about their talks.

Mr Vucic said they had discussed Kosovo’s recent decisions to turn its security force into a fully-fledged army and to impose 100 per cent tariffs on imports from Serbia, which he complained had caused “serious tension”.

“Russia, like Serbia, wants the situation in the Balkans to remain stable and safe,” Mr Putin said.

“In particular, as regards Kosovo, the Russian position is well-known: we are in favour of Belgrade and Pristina reaching a viable and mutually beneficial solution,” on the basis of an existing United Nations resolution, he added.

Mr Putin accused Kosovo of failing to stick to previous agreements, however, and said he shared Belgrade’s concern that “irresponsible actions by the Kosovo leadership could lead to destabilisation in the Balkans”.

The Russian leader did not directly address speculation that a possible western-backed deal to normalise Serbia-Kosovo relations could come through an exchange of their territory and change of borders – a move that critics warn would reignite simmering Balkan disputes.

Mr Putin travelled to Belgrade with several Russian government ministers, who signed what local media said were at least 20 deals and memoranda with their Serbian counterparts on matters ranging from energy to education.

Moscow already dominates Serbia’s energy sector, and Mr Vucic said he hoped his country would be chosen as a transit state for the new Turk Stream pipeline, which will bring Russian gas across the Black Sea to Turkey and then carry it through the Balkans to central Europe.

The pipeline would also cross EU states such as Bulgaria and Hungary, and Mr Putin said its construction depended on “whether they are able to defend their sovereign national interests in dialogue with European structures”.

On Thursday evening, Mr Putin and Mr Vucic were greeted by cheering and flag-waving crowds outside St Sava’s cathedral in central Belgrade.