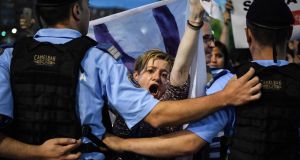 Protesters shouting anti-government slogans in front of the Romanian government headquarters in Bucharest on May 30th. Photograph: Daniel Mihailescu/AFP/Getty Images

Civil society groups in Romania have appealed to its president to hold urgent talks on the faltering fight against graft, as its populist government steps up demands for the dismissal of the country’s chief anti-corruption prosecutor.

Hundreds of thousands of Romanians have taken part in nationwide protests against the government’s attempts to water down anti-corruption legislation since the Social Democrats (PSD) took power in early 2017.

Several senior PSD members, including its leader Liviu Dragnea, have been convicted or prosecuted for graft and other offences in recent years, and the party accuses the head of the anti-corruption agency, Laura Codruta Kovesi, of political bias.

The PSD received a major boost last week, when Romania’s constitutional court ruled that President Klaus Iohannis did not have the right to reject a request from justice minister Tudorel Toader to fire Ms Codruta Kovesi for alleged abuse of office.

The decision has angered civil society groups, who note that Romania’s judicial watchdog called the allegation unfounded, and they warn that the country’s reputation would be badly damaged by the dismissal of Ms Codruta Kovesi, whose team has been hailed internationally for prosecuting powerful figures.

A group of 37 organisations signed a letter to Mr Iohannis this week asking him to hold talks with civil society, political parties and judicial experts before deciding whether to sack Ms Codruta Kovesi, a move he is deeply reluctant to make.

“These talks must also look at the future of the anti-corruption fight, the independence of the judiciary, respect for rule of law and the role of the constitutional court,” the signatories wrote.

“We consider these consultations to be necessary because Romania has reached a critical moment in its history, when our place in the European Union, democracy and the rule of law are intentionally threatened by those who are elected or appointed to defend them.”

The national anti-corruption directorate (DNA), which Ms Codruta Kovesi leads, said the constitutional court ruling was “the moment to sound the alarm and express concern about the potential damage to the independent status of prosecutors, which represents an essential premise of the fight against corruption”.

The government insists it is acting legally in seeking the dismissal of Ms Codruta Kovesi, despite the European Union’s view that the DNA is a bright spot in a troubled Romanian legal system that is under special monitoring by Brussels.

The PSD’s apparent determination to tighten government control over the judiciary has also fuelled EU fears that it is following the example of populist ruling parties in Hungary and Poland, where threats to the rule of law are growing.

Perhaps in a bid to pre-empt another round of opposition protests, the PSD has called a pro-government rally for central Bucharest on Saturday night, and says it hopes to attract hundreds of thousands of supporters.

Mr Dragnea – who was convicted of vote rigging and now faces fraud charges – claims the event will show the PSD’s determination to defend the rule of law from “illegitimate, hidden, underground structures that . . . covertly influence important decisions”.