Repeat elections loom in Spain as left and right in stalemates

Political in-fighting threatens the formation of national and Madrid administrations 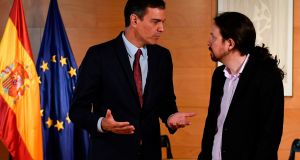 zThe failure of Spain’s main political parties to reach governing agreements has created a deadlock at a national level and in the Madrid region, raising the prospect of repeat elections in the autumn.

Acting prime minister Pedro Sánchez has called an investiture session for July 22nd-23rd in the hope of gaining enough parliamentary support to form a new administration after his Socialists fell short of a majority in winning April’s general election. So far he has not managed to secure the backing of any of the other main parties, meaning his investiture appears to be heading for failure.

The leftist Podemos party is seen as the Socialists’ natural ally. However, after five post-electoral meetings between Podemos leader Pablo Iglesias and Mr Sánchez, the two parties are at loggerheads. The prime minister has repeatedly rejected Mr Iglesias’s demand that they should govern in coalition, instead preferring a less binding confidence-and-supply agreement.

This week, relations between the two appeared to deteriorate, as both parties briefed against each other in the media, claiming that their potential partner is negotiating in bad faith.

Mr Iglesias accused the Socialists of doing a “cut and paste” from their election manifesto when they presented Podemos with policies for negotiation. He also warned that the Socialists’ insistence that “the government has to be made up of one party contradicts the way in which Spaniards have voted”.

Socialist spokeswoman Adriana Lastra hit back after the two parties’ leaders met on Tuesday. “Iglesias is more interested in cabinet posts than developing policies,” she said.

Recent polls by the CIS national research centre show that nearly half of Spaniards would like a coalition government, with a Socialist-Podemos pairing the most popular.

Can the right sink its differences?

As the clock runs down ahead of the investiture session, the Socialists have also started appealing to the right for parliamentary support, a strategy that has further riled Podemos. On Wednesday, Socialist members of congress sent a letter to their counterparts in the conservative Popular Party (PP), asking them to abstain in the investiture vote in order to help Mr Sánchez.

However, while it looks unlikely that the PP will abstain, the political right has divisions of its own that are impeding attempts to form regional administrations.

An investiture session held in the Madrid regional parliament on Wednesday fell flat after the far-right Vox party refused to back a proposed coalition of the PP and Ciudadanos party. Vox complains that it has been left out of policy talks, while Ciudadanos is reluctant to be seen to be dealing with the far-right.

Representatives of the three parties met on Wednesday in an effort to unblock a similar stalemate in the southern region of Murcia. But Madrid is the Spanish right’s most prized regional stronghold and the PP is particularly determined not to surrender it to the left.

If the standoffs continue, Spaniards might have to vote again in a general election – a fourth in four years – and a Madrid regional election, both in November.