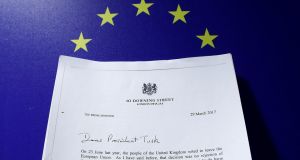 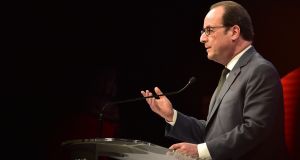 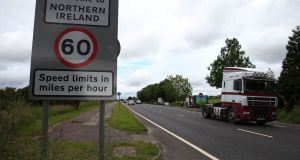 Traffic crossing the border between the Republic of Ireland and Northern Ireland in the village of Bridgend, Co Donegal. Photograph: Brian Lawless/PA 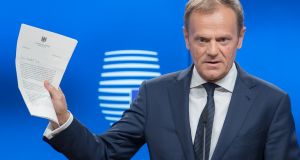 On no fewer than seven occasions in her six-page letter, Theresa May referred to the “deep and special relationship” the United Kingdom seeks with the European Union after Brexit. It’s an echo of the “special relationship”, a formulation the UK has long used to characterise its close bond with the United States. It also set the tone of May’s letter, which was more conciliatory – dare we say it, more pro-European – than any of her previous set-piece speeches on the topic. Remove a dozen lines and it could have been an application letter.

This seemingly innocuous line hints at one of the key early points of disagreement between London and other European capitals. In effect there will be two big Brexit deals: one to set the terms of the UK’s exit and another to outline the future relationship between the UK and the EU. As May indicates, her government wants the two deals to be worked out concurrently. In Brussels and elsewhere on the continent, the desire is to agree each deal sequentially. The most likely choreography, according to one senior EU official, is that informal talks on the future relationship will take place in the background over the next two years but that no formal agreement will be agreed until after the divorce terms are finalised.

If, however, we leave the European Union without an agreement the default position is that we would have to trade on World Trade Organisation terms. In security terms a failure to reach agreement would mean our co-operation in the fight against crime and terrorism would be weakened.

This is the closest London comes to playing hardball. The British government, squaring up against 27 other capital cities, many of them convinced it must be made to pay for leaving, is in a relatively poor negotiating position. One of the cards it will seek to play is security, reminding EU states of the importance of counter-terrorism and defence cooperation at a time when the threat level is acute. The word “security” was mentioned 11 times in the letter, compared to just six references to “trade”, for example. To some ears, lines like this will sound like a threat, with May in effect saying: a return to WTO terms would be a disaster for us, but just think of the security fallout for the rest of the union if we fail to strike a deal.

The UK would dearly have liked to remain in the single market. Indeed, that was its opening position after the referendum last year. But it faced implacable opposition from Brussels and other EU capitals, who insisted that the “four freedoms” – free movement of goods, capital, services and people – were indivisible. That meant the price of single market membership was for London to continue to abide by EU immigration rules. Here, May is conceding the point at the outset of the formal negotiations. In a similar vein, she goes on to acknowledge that the UK will lose influence over the rules that affect the European economy and that there will be “consequences” for the UK in leaving the bloc. She’s not wrong. EU capitals may not speak of punishing the UK, but no club can offer the same attractive terms to outsiders as it does to members. Within an hour of May’s speech, French president François Hollande remarked that Brexit would be “painful” for the British.

In particular, we must pay attention to the UK’s unique relationship with the Republic of Ireland and the importance of the peace process in Northern Ireland

Officials in Dublin had been assured that May’s letter would highlight Irish concerns. And so it does. May doesn’t make any promises – how could she? – but her letter hits many of the key points causing anxiety on this side of the Irish Sea: the future of the Common Travel Area, the dangers of a hard Border, the consequences for the peace process and the Belfast Agreement. The “unique relationship” between the UK and the Republic is a reference to the huge bilateral trade volumes and the Irish diaspora in Britain. Absent, however, is any reference to the customs union between the two states. The future of that arrangement will depend on the nature of whatever trade deal emerges between the UK and the EU – one of the most difficult issues for negotiators to resolve.