Justification for an extension must be linked to a new event or a new political process, says Barnier

Tánaiste Simon Coveney says that there is no desire among the EU member states to renegotiate the current Brexit agreement. Video: EU Council 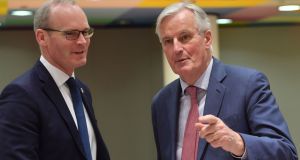 The EU could reject Theresa May’s request for an extension to Britain’s membership this week unless she presents a plan to break the impasse at Westminster, Tánaiste Simon Coveney has warned.

EU chief negotiator Michel Barnier said that delaying Brexit by more than a few weeks must be linked to “a new event or new political process”.

The British prime minister is expected to request an extension to the article 50 negotiating deadline in a letter to European Council president Donald Tusk ahead of Thursday’s summit in Brussels.

Among the options being discussed in London on Tuesday was a request for a short extension that could be lengthened if Mrs May fails to win a majority for her Brexit deal over the next few weeks.

However, speaking in Brussels on Tuesday, Mr Coveney said that granting more time for negotiations over Brexit would not be automatic.

“I don’t think there’s any appetite among EU leaders to simply kick this can down the road,” the Tánaiste told journalists following a meeting of European affairs ministers of the remaining 27 member states.

“I think that people would be very foolish to think that this is just some kind of political game, and that an extension will automatically be facilitated.

“I think that EU leaders will be demanding, and understandably so, and want to know if there is an extension to article 50 that that time will be used too implement a new plan of action , potentially a new approach, that can help the British parliament to get beyond the impasse that is currently preventing agreement.”

Mr Barnier said there was a price to pay for an extension, and leaders would have to be convinced that it would be productive. “What would be its purpose? And how do we make sure we do not end up in the same position as today?”

He said the justification for an extension “must be linked to a new event or new political process”, a hint that Mrs May should call a general election or a second referendum.

The Irish Government has an open mind on whether the EU should grant a long or short extension of article 50 at this week’s summit, according to sources involved in high-level discussions on the subject.

Mrs May abandoned plans to put her Brexit deal to a vote at Westminster ahead of Thursday’s EU summit after Commons speaker John Bercow warned on Monday that he would not allow a third vote on the deal if it had not changed.