Putin says poisoned ex-spy Skripal is a ‘scumbag’ and ‘traitor’ 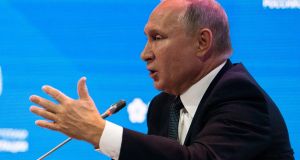 Russian president Vladimir Putin said on Wednesday that Sergei Skripal, a Russian former double agent who was poisoned in Britain, was a scumbag who betrayed Russia.

Mr Skripal and his daughter Yulia were found slumped on a public bench in the English city of Salisbury in March. Britain says they were poisoned with a nerve agent administered by Russian intelligence officers.

A woman later died from what British police say was contact with the poison after her partner found a discarded perfume bottle containing it and gave it to her.

Russia denies any involvement in the affair, which has deepened its international isolation.

“I see that some of your colleagues are pushing the theory that Mr Skripal was almost some kind of human rights activist,” Mr Putin said at an energy forum in Moscow.