Paris Letter: Aznavour was determined, wise and persevering, in work as in love

Charles Aznavour, who was known as the "French Frank Sinatra", has died aged 94. 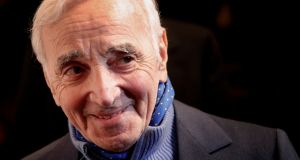 French singer Charles Aznavour, who described himself as “100 per cent French and 100 per cent Armenian” Photograph: Christophe Ena/Pool/File Photo/Reuters

Following Charles Aznavour’s death on Monday at the age of 94, French politicians are calling for a state funeral for this son of Armenian immigrants. The city of Paris bathed the Eiffel Tower in golden light, broadcast Aznavour’s most famous songs from the Pont d’Iéna and projected photographs of the singer on to a giant screen.

Aznavour was to have accompanied President Emmanuel Macron to Yerevan, to perform for the Francophonie summit on October 11th-12th. Instead France and Armenia will hold a joint homage to the actor and singer who described himself as “100 per cent French and 100 per cent Armenian”.

Halliday conveyed a biker image and was marked by substance abuse, muddled marriages and squabbling heirs. Aznavour is more consensual. Though he had only a primary school education, his life and oeuvre showed great wisdom. Aznavour believed in hard work and perseverance.

He projected himself into the future, speaking of projects to keep himself busy until the age of 120.

Yet back in the 1950s, Aznavour told the music publisher Raoul Breton he wanted to give up. He summarised his handicaps as “No voice. No looks. No luck.” Breton told Aznavour that if the French could learn to love Louis Armstrong’s voice, they could love learn to love his too, that Aznavour should keep trying. Uncharitable remarks by critics and colleagues continued. The British called him “Aznovoice”. Sammy David jnr said Aznavour’s voice was “a waking nightmare”.

Aznavour’s concert at the Alhambra concert hall in Paris on October 9th, 1958, was a turning point. He sang Je Me Voyais Déjà, about a failed singer from the provinces who imagines top billing for himself. Aznavour had written the plaintive tale for Yves Montand, who rejected it. The audience seemed cold, and Aznavour felt humiliated. He nonetheless returned to the stage to take a bow. To his surprise, the crowd rose in a standing ovation. It could have been an allegory for his career.

After Aznavour’s role in Jean Cocteau’s Testament of Orpheus (1959), Cocteau said “despair wasn’t popular before him”. Aznavour starred as a piano player in love with a woman pursued by gangsters in François Truffaut’s 1963 film Shoot the Piano Player. He acted in 60 films and worked with famous directors including Volker Schlöndorff and Claude Chabrol.

Aznavour’s friends, including Hallyday, Catherine Deneuve, Charles Trenet and Jean Marais, attended his premiere at the Olympia concert hall in January 1963, where he performed 11 encores. He was 39 and his singing career was finally launched.

Aznavour wasn’t satisfied. “No 1 in Paris, yes,” he said. “But if I’m only 10th or 20th in New York, there’s no point ... I want the whole planet.” Later the same year, he triumphed at Carnegie Hall. “The French Frank Sinatra” succeeded in the US where other French singers failed because he made the effort to speak the Americans’ language.

Johnny sang French versions of US and British hits. Aznavour imposed his songs in the US. His hit Tu t’Laisses Aller, about a failing relationship, was sung marvellously by his friend Liza Minnelli as You’ve Let Yourself Go.

Piaf did not believe in his talent. She knew Aznavour was self-conscious about his nose and urged him to have plastic surgery

In his three-volume autobiography, Aznavour wrote that there was only one rule: “Work, learning. When the metro is packed, you have to push your way in. Ideas are the same. When they force themselves on you, you do the best things.”

Aznavour’s life changed forever when he met Edith Piaf in 1946. She was already famous and hired him to be her secretary, driver, dogsbody and confidant. Aznavour said Piaf would not have him as her lover, unlike most of the young men who gravitated around her.

Though he wrote songs for her, including Plus Bleu que Tes Yeux and Jezebel, Piaf did not believe in his talent. She knew Aznavour was self-conscious about his nose and urged him to have plastic surgery, which she paid for.

Aznavour, who married three times and fathered six children, never forgot that love – whether waxing or waning – is the most basic human emotion. Countless couples have danced to the lilting melody of The Old-Fashioned Way.

Maurice Chevalier said of Aznavour, “He sings of love as no one did before, with a new vocabulary which is that of the physical gestures of love ... Aznavour is the first singer who dares to sing of love as one feels, makes and suffers from it.”