Teenager shot by police in Hong Kong charged with rioting 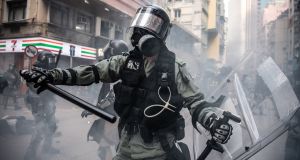 The Hong Kong teenager shot at point-blank range by a policeman was charged in court on Thursday with rioting and assaulting an officer, a case that has inflamed tensions in the city as authorities grapple with widespread protests that are increasingly challenging their legitimacy.

In response to the escalating violence, the government indicated on Thursday they are preparing to invoke highly controversial, colonial-era emergency powers to ban the use of face masks in an effort to help restore order.

Tsang Chi-kin (18) was shot on Tuesday during mass unrest as protesters and police clashed on the 70th anniversary of Communist Party rule in China. The officer fired as the teenager struck him with a metal pole. The bullet missed his heart by three centimetres, and he is now reportedly in a stable condition following surgery.

Commissioner of police Stephen Lo defended the shooting as “lawful and reasonable”, saying the officer was forced to defend himself and his colleagues. He said that five other live rounds had been fired on Tuesday – two warning shots fired in the air, and three shots that had been fired at demonstrators but that had not found a target.

The protesters condemned the police action and called the shooting “entirely disproportionate and unnecessary”. On Wednesday night, the streets were once again alight with burning barricades and firebombs, as activists vented their rage at the police force and chanted slogans calling for it to be disbanded.

Mr Tsang, who was represented in court by his lawyer on Thursday, was one of seven people charged with rioting and assaulting an officer at the Sha Tin magistrates court. A conviction for rioting can carry a prison term of up to 10 years in Hong Kong. The hearing will resume on Friday to consider bail.

Local media reported on Thursday that the police had only loosened their guidelines for using lethal force a day before the shooting. Hong Kong Free Press carried a report on a leaked police memo that showed a new amendment to the police procedures manual, released early this week, which said an officer was permitted to use lethal force, such as live rounds, when facing an assault that causes, or is “relatively likely” to cause death or serious injury.

In the previous version of the guidelines, police were required to ascertain whether the assailant had “intent” to cause death or serious injury before lethal force could be used. The new version omitted any reference to intent, the report said.

In further efforts to quell the protests that have roiled the city for the past four months, legislators are preparing to announce a ban on people wearing masks at public gatherings, a spokesman said.

Protesters have used face masks to avoid identification, along with gas masks, goggles and helmets to protect themselves from tear gas and projectiles fired by the police.

Police associations and pro-Beijing legislators have been demanding that tougher laws be introduced to help combat the protesters, including calls for a curfew, a face-mask ban, and the right to detain arrestees for longer.

The government plans to invoke statutes that bypass the legislature to introduce the ban. Under the 1922 emergency ordinance, “in case of emergency or public danger” the chief executive has the power to make “any regulations whatsoever which [they] may consider desirable in the public interest”.

Pro-Beijing lawmaker Elizabeth Quat said the ban would help deter some of the violent activists.

“It’s not the absolute solution, but it’s one of the solutions that can help handle today’s Hong Kong critical situation,” she said.

In response, legal scholar Eric Cheung said invoking the law could “eternally doom” Hong Kong and warned Hong Kong’s leader Carrie Lam not to take such a “massive gamble” that would jeopardise the city’s status as a financial hub.

“Once you set this precedent – bypassing the legitimate legislative process by making use of this emergency regulation – once you start that, there can be no end to it,” he told local broadcaster RTHK.

Amy Leung, a 30-year-old legal worker who supports the protests, said the law was “a draconian piece of legislation . . . it is martial law in all but name.”

Invoking the law would represent “another step closer to authoritarianism for Hong Kong”, she said.