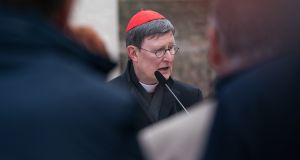 Cardinal Rainer Maria Woelki: under pressure after deciding to withhold a report into sexual abuse by clerics in the Cologne archdiocese. Photograph: Gunther Ortmann/via Getty Images)

Priests in Cologne’s Catholic archdiocese are demanding their archbishop resign for suppressing a critical report into clerical sexual abuse in the western German diocese.

The growing crisis in the powerful western diocese has taken on fresh urgency after claims that Cardinal Rainer Maria Woelki ignored church guidelines rather than report a friend’s sexual abuse record to Rome.

The case involves a priest friend who had convictions for sexually abusing young boys in the 1970s. Instead of reporting that and other abuse cases to Rome, in line with new church guidelines, Woelki reportedly held back his friend’s file, citing the poor health of the priest – who died in 2017.

A steady drip of allegations prompted a priest in the Cologne archdiocese to write a letter, published in a local newspaper, suggesting the cardinal was “gambling away” his credibility.

After his newspaper article, Fr Klaus Koltermann of Dormagen, 20 minutes north of Cologne, received a letter from the archdiocese warning him of “possibly serious breaches of your service obligations . . . that could have consequences”.

Fr Koltermann responded that he was motivated by his conscience and “the disquiet of the greatest believers” in his parish.

After their correspondence was published in a Cologne newspaper, the archdiocese withdrew the disciplinary threat.

Now more than 30 priests in the Cologne archdiocese have joined forces, holding two video meetings, to draft a letter expressing fury with their superior.

“The developments of the last months stretch greatly our ability to show the no doubt necessary loyalty to the archbishop of Cologne,” wrote the priests in a first draft of their letter, demanding a “truthful and transparent approach with one’s own mistakes as well as recognition of structural failures in the past and present”.

That was a reference to an investigation commissioned by Woelki into sexual abuse in the archdiocese. Instead of publishing the final report as promised last October, said to be highly critical of senior Cologne clerics both living and dead, Woelki accused its authors of sloppiness and commissioned a new investigation report, due to appear next month.

The authors of the original report, senior lawyers from Munich, have disputed the Cologne cardinal’s critique of their work. Last November the neighbouring diocese of Aachen published a report by their office without hesitation.

Pressed on the unseen report, a spokesman for the Cologne archdiocese said publication would trigger defamation action from named senior clerics who dispute the document’s claims.

Last week the Munich investigation team called the cardinal’s bluff, offering to publish the report on its own website and assume liability should any legal action follow.

In an open letter, the Munich law office complained that, while the Cologne archdiocese keeps its report under wraps, it has published a legal appraisal highlighting its supposed errors and inaccuracies.

Leaked excerpts of the unpublished report suggest it is unflattering towards the late Cardinal Joachim Meisner, archbishop of Cologne for 28 years and an influential German cleric until his death in 2017. Meisner was mentor of a generation of conservative church figures – including his successor, Rainer Woelki.

Hamburg archbishop Stefan Hesse was Cardinal Meisner’s deputy in Cologne for 11 years until 2017, and the investigation document reportedly accuses him of a “lack of awareness of the problem [posed by] sexual abuse of minors by clerics”.

The growing scandal has had an immediate and noticeable effect in the Cologne region, say locals: an online calendar for appointments to officially leave the Catholic Church has no more slots available until April, with local media reporting that departures so far in 2021 are up 70 per cent year-on-year.

Officials in other dioceses are watching the drama unfold in Cologne with growing alarm, and no power to intervene.

“No one can see how he [Woelki] can get out of this and everyone is waiting for someone senior to relinquish their position,” said one official to The Irish Times.

On Friday the archdiocese of Berlin published its own report, detailing files of 61 sexual abusing priests and 121 victims found in church archives. The report was triggered by allegations in 2010 of abusing priests at a Jesuit secondary school in the city.

Similar to other probes, the authors noted a pattern of “organised irresponsibility”, “sketchy file-keeping” and “poor memories” within senior church officials. For three years until his departure for Cologne in 2014, the Berlin archdiocese was led by Cardinal Woelki.