Pope Francis backs reform rather than closure for Vatican Bank 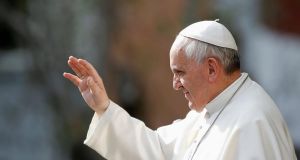 Pope Francis had implied he would consider all options for the Vatican Bank, ranging from radical reform through to outright closure. Photograph: Tony Gentile/Reuters

The Vatican confirmed yesterday that Pope Francis has formally approved the ongoing reform process at the Vatican Bank, IOR, effectively ending speculation he might choose to close the institution.

Inadvertently, Francis himself had generated that speculation when asked about the future of the bank during a mid-Atlantic press conference on his way back from last summer’s World Youth Day celebrations in Brazil. He implied then that he would consider all options, ranging from radical reform through to outright closure.

However, Pope Francis yesterday formally approved an ongoing reform process at the bank, begun by his predecessor Pope Benedict, who shortly before he resigned as pope in February last year had appointed the current bank president, Ernst von Freyberg. Given that Francis is clearly no friend of of either deregulated capitalism or of murky financial speculation, he immediately supported Mr von Freyberg’s attempt to reform a bank that will forever be associated with the 1982 crash of the Banco Ambrosiano .

Like the pope himself, Mr von Freyberg lives in the Santa Marta Vatican residence, where the two men regularly exchange notes about a reform process which has seen all 20,000 of IOR accounts come under a strict review, carried out by the global risk-control group Promontory Financial.