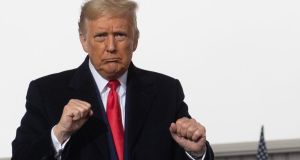 US president Donald Trump: His team spent $11 million on a 60-second ad during the Super Bowl in February. Photograph: Saul Loeb

“Can you donate $25 to make history?” That’s just one of the emails from Democratic vice-presidential candidate Kamala Harris flooding into inboxes across the land, as candidates in the US election aim to shore up their cash position before next Tuesday’s election.

Money has always been the oil that has helped fuel American politics. This year, experts are expecting fundraising figures to break records.

“We are seeing a lot of money pour in,” says Ellen Weintraub, a commissioner at the Federal Election Commission. The Centre for Responsive Politics, an independent group which tracks money in US politics, estimates that $11 billion will be spent in the 2020 election – a record-breaking number. Approximately $6.5 billion was raised and spent in the 2016 election.

The last decade or so has seen a fundamental shift in the way money is raised in US politics. The advent of the internet opened up new avenues for political candidates, and made it easier for ordinary donors to contribute to campaigns. Rather than open up their cheque-book, motivated voters could donate to their candidate of choice with a simple click of a mouse.

ActBlue, a website based in Cambridge, Massachusetts, has become the powerhouse of Democratic fundraising efforts. Most people who donate to candidates now do so via the ActBlue site. Republicans soon established their own version, WinRed, which allows people to donate using technology.

But while technological advances have led to an increase in small-dollar donors – Joe Biden likes to say that his average donation is $43 – big-ticket contributors continue to play a major role.

“Wealthy special interests have an outsized level of influence in the US political system,” says Brendan Fischer, director of the Federal Reform Programme at the Campaign Legal Centre. “More people of average means have become accustomed to making small political contributions, and that has an impact. But it requires a lot of small-dollar donations raised through ActBlue to counter the spending of a super pac [political action committee] founded by a handful of million-dollar donors.”

Though election fundraising and expenditure in the United States is highly regulated – candidates must report their finances to the Federal Election Commission (FEC) and foreign individuals and entities are banned from contributing to any candidate – there is still space for significant private money in the US electoral system.

Legally, a candidate is only permitted to take $2,800 from an individual (though they can accept $2,800 for a primary contest and the same amount for the general election). But additionally the Democratic and Republican committees can accept donations. They also run “segregated accounts” that can raise money. In addition, state party committees have their own fundraising capabilities. The result is that individual donors can contribute to their choice of candidate through a variety of means.

But it is the power of political action committees – or super pacs – that continues to exert an outsized influence on the US election. The committees can raise unlimited sums of money from big business, unions and individuals. Although they are prohibited from contributing or co-ordinating with parties or candidates, they run political and election ads across the country.

The Trump campaign has already eaten into its significant cash pile this year, including dropping a cool $11 million on a 60-second ad during the Super Bowl in February

To take one example in South Carolina, where Republican incumbent Lindsey Graham is facing a strong challenge from Democrat Jaime Harrison, the Senate Leadership Fund – a super pac that aims to preserve and expand the Republican majority in the Senate – is running anti-Harrison ads.

Ellen Weintraub of the Federal Election Commission explains that various court rulings, particularly the landmark supreme court “Citizens United” ruling of 2010 which allowed corporations and other donors to spend an unlimited money on elections based on the constitutional right to freedom of speech, have impacted on campaign finance laws.

“I’m not a supreme court justice. I am merely a humble election commissioner, so I can only administer the law as it’s been interpreted by our supreme court,” she says, adding: “There’s a reason why the super pacs raise and spend so much money. It’s because there are no limits on how much money they can raise and spend, other than the fact that they too are not allowed to accept money from foreign nationals.”

As election day approaches, TV and social media ads are blanketing news and internet channels across the country, particularly in swing states. Just as Biden is ahead in the polls, he is also well ahead in terms of fundraising.

Recent figures from the FEC showed that the Democratic candidate began October with $177 million, compared with Trump’s $63.1 million. The Biden campaign has splashed on TV and other media ads and at least one innovative campaign spend – chartering an Amtrak train for a six-city tour through Ohio and Pennsylvania, in a nod to Biden’s “Amtrak Joe” moniker after he spent years commuting to and from Washington from Delaware by train.

Biden’s cash-rich position marks a big turnaround from earlier in the year. The Trump campaign, which began amassing a huge fundraising haul to finance a second-term campaign almost immediately after Trump was inaugurated, outpaced Biden in terms of fundraising as recently as the spring. But once Biden emerged as the presumptive Democratic nominee the money came pouring in.

The Trump campaign, in contrast, has already eaten into its significant cash pile this year, including dropping a cool $11 million on a 60-second ad during the Super Bowl in February, to compete with a similar ad by billionaire Mike Bloomberg, then a Democratic candidate.

The Republican candidate may also be losing money to the Lincoln Project – a high-profile group of anti-Trump Republicans that has been running effective ads, including a controversial billboard campaign in Times Square featuring Ivanka Trump and Jared Kushner, which prompted threats of legal action from the couple.

The Lincoln Project has raised about $60 million since launching late last year, though some of its fund may come from traditional Democratic supporters.

In recent weeks there have been reports that the Trump campaign cut back on ad spending and cancelled campaigns, just as Biden ramps up spending in the final stretch of the campaign.

But the campaign has hit back. This weekend, officials announced that $26 million was raised for the president in the hours after the final presidential debate. The campaign plans a heavy ad buy in Minnesota, a state that hasn’t voted for a Republican president since Richard Nixon in 1972 but which Republicans are hoping to flip.

Officials also point out – correctly – that Trump was vastly outraised by Hillary Clinton in 2016 but still won the election.

In order to mount a viable campaign for office, a person needs to have a network of wealthy friends and associates who can support their campaign

The president himself has also raised the issue in recent public appearances. During last Thursday’s debate he again claimed that he could raise “millions” from corporations and big-money donors if he just made a few calls, but to do so would mean he would be compromised.

Biden’s big cash advantage has seen him plough money into the Republican-leaning state of Texas and invest heavily in Florida, thanks to a Bloomberg-run super pac. Whether it pays off will be revealed on election day.

Whatever the result, this year’s election is a reminder of the role money plays in campaigning. As Fischer of the Campaign for Legal Reform notes, the impact of this level of money is not about corruption in the classic sense but about influence.

“The impact of money in our political system very rarely manifests itself in political contributions in exchange for votes. Most voters and politicians are too sophisticated for that. What it does do is buy access and buy influence.

“Contributions are made with the expectation that, down the road, the donor will be able to go back to the elected official and at a minimum get a meeting and be able to push their agenda, though not in so many words.”

More fundamentally, it also influences who runs for office in the United States.

“In order to mount a viable campaign for office, a person needs to have a network of wealthy friends and associates who can support their campaign.

“That has a limiting effect in the first instance about who can ever run for office.”

Although a Democratic-controlled Congress may try to implement some reform of the campaign financing system, ultimately the courts may play a crucial role. As another justice is appointed to the supreme court, that is a reminder of what is at stake.