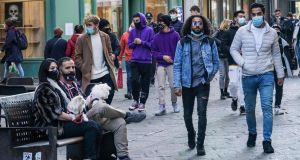 London and Paris are facing more curbs on public life from Saturday and Belgium will close bars and restaurants for a month in Europe’s escalating effort to check its coronavirus surge while limiting economic harm.

As cases reach records across Europe, the UK and France are avoiding nationwide restrictions. Londoners will be banned from mixing with other households indoors, while people in Paris and eight other French cities will be confined to home between 9 p. and 6 am for four weeks. Italy’s Lombardy region, which includes Milan, reined in alcohol consumption and gambling.

After broad lockdowns triggered some of the worst recessions in living memory in the second quarter, European officials are eager to stick to local restrictions targeted mainly at urban virus hot spots this time around.

“The economic recovery obviously goes better if we have the infection numbers under control,” German Chancellor Angela Merkel said on Friday after a European Union summit in Brussels.

“We agreed that we need to bring down the number of those infected and that means we need to reduce contacts.”

Yet Belgium, which has the most cases per-capita in Europe except for the Czech Republic, went for national measures.

Prime Minister Alexander de Croo said the hospitality restrictions, along with a midnight to 5 am curfew and curbs on alcohol sales and gatherings, will take effect Monday for four weeks. Work from home will be mandatory whenever possible. Bars in Brussels already were closed last week.

“By many measures, the numbers are worse than they were in March or April,” Mr De Croo told a news conference. “And I bring no good message: those numbers will likely keep rising in the coming days.”

Italy’s reported daily cases rose by a record 10,010 on Friday, compared with 8,804 on Thursday. The positive-test rate climbed to 6.7 per cent and patients in intensive care rose by 52 to 638. That compares with a peak of more than 4,000 in April.

Spain reported more than 6,000 new cases for a second consecutive day, while occupancy of Madrid’s intensive-care beds eased slightly to 35.7 per cent.

Greece reported 508 new cases, the most since the start of the pandemic, increasing the total to 24,450. Another eight people died of Covid-19, raising the toll to 490.