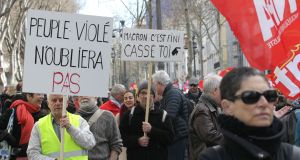 People hold placards stating “People’s rights have been violated and will not forget” and “Macron, it is over, get lost” at a demonstration in Marseilles. Photograph: Pascal Pochard-Casabianca

It has been a rough week for President Emmanuel Macron’s reform of the French pension system. Though his administration will ultimately succeed in forcing the law through, the procedure has done lasting damage to Macron’s party, La République en Marche (LRM), and to his popularity.

After a month of debate in the National Assembly, during which opposition parties obstructed progress by proposing 41,888 amendments to the draft law, prime minister Edouard Philippe announced in the midst of a session devoted to the coronavirus epidemic that he would invoke article 49.3 of the French constitution to push the legislative process forward by decree.

Opposition parties filed two censure motions, one on the left and one on the right. LRM still holds a majority in the assembly, so the government did not fall.

But by the time the government survived the vote, at about 1am on Wednesday, another four members of Macron’s majority had left his party, one senator and three deputies. A departing LRM deputy even voted for the censure motion proposed by the Socialists.

Fifteen LRM deputies have left the party since Macron came to office. If 10 more go, he will lose his majority. Party leaders promise they will take stock after the March 15th-22nd municipal elections, in which LRM is expected to perform badly.

After the failed censure vote, the Socialists, with the support of the far-left France Unbowed (LFI) and Communist parties, proposed a commission of inquiry into “the sincerity, the exhaustiveness and exactitude” of the 1,000-page impact study on the pension reform, which the government published on January 24th. The Socialists accuse the government of faking data.

Disarray over the reform is total. The conservative party, Les Républicains (LR), refused to support the left-wing censure motion because they believed the reform did not go far enough. LR upped the retirement age to 65 in its proposal, and called for the end of all special retirement regimes. Marine Le Pen, leader of the far-right Rassemblement National, said the reform proposed by LR was “worse than Macron’s”.

In Tuesday night’s debate on the censure motion, the left reiterated accusations about “the authoritarian drift of the regime”. LFI leader Jean-Luc Mélenchon called Philippe’s invocation of article 49.3 “a day of shame for parliamentary democracy”. The procedure has been used 88 times by previous prime ministers.

Right-wing deputies accused the government of cynicism and of creating “a parliamentary fiasco”.

Macron committed to melding France’s 42 different pension regimes into a universal system during his presidential campaign. At his request, the conservative politician Jean-Paul Delevoye carried out two years of consultations. Macron promised a nationwide debate on the reform before its enactment.

The government’s insistence on raising the retirement age from 62 to 64 was the main blocking point.

France already has the highest level of withholding taxes in the world. Most of its EU partners have raised their retirement age to 66 or 67. French pensions, on average 75 per cent of an employee’s salary at retirement, are higher than elsewhere. The annual bill for state pensions will come to €325 billion this year. The bill cannot be paid unless people work longer, the government says.

A 61-day transportation strike, the longest in the country’s history, started on December 5th. Trade unions organised 10 days of “national mobilisation” spread over December, January and February. The next protest day is scheduled for March 31st.

Confusion continued throughout the winter regarding the precise goals and modalities of the reform. Macron made concessions to several sectors, including police, the military and teachers, undermining his claim to end special pension regimes. A promised simulator that would tell individual citizens the effect of the reform on their pensions never materalised.

Opponents of the pension reform have portrayed Macron as the leader of a small elite bent on exploiting the people. Macron’s LRM has drifted rightward, and is increasingly rejected by the faction that originated in the Socialist party. According to the polling institute Ifop, 20 per cent of centre-left voters shifted from LRM to the ecologists in last year’s European elections, while 27 per cent of conservative LR voters switched to Macron.

But as Michel Noblecourt writes in Le Monde, everyone comes out losers. The government and trade unions have both lost credibility in their showdown. A reform that once enjoyed broad support is now rejected by a majority of the population. And the unpopularity of the reform will be a millstone around Macron’s neck.