‘Europe’s fate is in its own hands’: EU leaders gather in Malta

Refugee crisis to be discussed after 4,500 drowned in Mediterranean in 2016

President of the European Council Donald Tusk addresses the media in Malta ahead of an informal meeting of EU Heads of State or Government. Video: EU Council 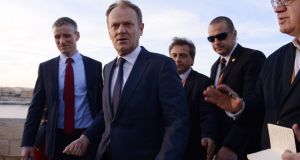 European Council president Donald Tusk (centre) speaks to the press on the eve of an Informal meeting of EU leaders in Malta. Photograph: Filippo Monteforte/AFP/Getty Images

European Union leaders have arrived in Malta for a one-day summit aimed at stemming the flow of migrants across the Mediterranean and mapping the future of the EU after Brexit.

The meeting has been overshadowed by concerns about Donald Trump’s actions since taking office, with some leaders sharply criticising the US president.

Arriving at the 16th century Grandmaster’s Palace in Valletta on Friday morning, French president Francois Hollande said there was no future in relations with Mr Trump unless those relations were “defined in common”.

He called for greater solidarity within the EU on security and defence, suggesting that Nato was not the only option for Europe’s collective defence.

“Who knows what president Trump wants on Nato,” he said.

German chancellor Angela Merkel avoided such direct criticism of the US president but she stressed the need for European countries to work together.

“Europe has its fate in its own hands. The more we are clear about how we define our role in the world, the better we can also take care of our transatlantic relations,” she said.

Theresa May will brief the other leaders on her visit to Washington last week, when she said that Mr Trump was “100 per cent” committed to Nato. She will urge other Nato member-states to fulfil their treaty obligation to spend at least 2 per cent of GDP on defence, a target currently met only by the US, Britain, Greece, Poland and Estonia.

Asked if Ms May could serve as a bridge between the EU and the US, Lithuanian president Dalia Grybauskaite said there was “no necessity for bridges” because “today we are communicating with the US only on Twitter”.

Austria’s chancellor Christian Kern criticised Mr Trump’s travel ban on seven majority-Muslim countries and suggested that the US shared responsibility for the refugee crisis because of its military interventions.

“It’s not acceptable for the international community if America shirks responsibility. We need to make this clear to our American friends. I’m convinced that there will be a high degree of unanimity on this question,” he said.

The leaders are discussing a number of measures aimed at closing down the migrant route from Libya to Italy, which was used by more than 180,000 people to reach Europe last year. More than 4,500 people have died trying to make the crossing and tens of thousands more have been rescued by European naval services, including Ireland’s, which alone rescued more than 15,000.

An EU agreement with Turkey which came into effect last year has reduced migration from the eastern Mediterranean by 90 per cent and EU leaders are hoping to achieve a comparable reduction on the central Mediterranean route.

The task is complicated by the fact that Libya’s UN-backed government is struggling to assert its authority throughout the country, which descended into chaos after a military intervention led by France, Britain and the US led to the overthrow of Muammar Ghadafy in 2011.

Later on Friday, after Ms May has left Malta, the other 27 leaders are due to discuss the future of the EU after Brexit. They will discuss a draft declaration to be made next month on the 60th anniversary of the signing of the Treaty of Rome, which established the European Economic Community.

Among the proposals is deeper co-operation on defence and foreign policy, as well as further economic and monetary integration.