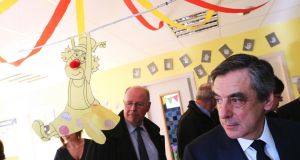 François Fillon: The presidential candidate visits a creche in Poix-Terron on Thursday even as the “Penelope-gate” investigation was expanded to include his two children. Photograph: François Nascimbeni/AFP/Getty Images

François Fillon, the embattled French presidential candidate for the conservative party Les Républicains, was contradicted by his wife in an interview recorded a decade ago but broadcast for the first time on Thursday by public television station France 2.

Fillon had just become prime minister of France in May 2007 when the British Daily Telegraph video-recorded the interview with Penelope Fillon, who is Welsh. “I have never been actually his assistant or anything like that. I don’t deal with his communication,” Ms Fillon told the Telegraph.

The investigative weekly Le Canard Enchaîné has revealed that Ms Fillon was paid hundreds of thousands of euro for what appear to have been fake jobs as a parliamentary assistant both to her husband and the man who replaced him in the National Assembly.

Until the scandal broke on January 25th, Fillon was the frontrunner in the race to succeed François Hollande as president of France. The presidential election takes place over two rounds, in April and May.

Back of the room

Ms Fillon told the Telegraph that she she helped her husband informally: “I always went with him on the election campaign whenever he needed help doling out leaflets and things like that. I like being myself at the back of the room and listening to things said about him.”

The 10-year-old interview, which contradicts Fillon’s assertion that his wife held a real job, could be the final blow to his presidential campaign.

Ms Fillon’s lawyer, Pierre Cornut-Gentille, said the quotes were “taken out of context” and that Ms Fillon had wanted to show “that she did not have the same conception of her role as the spouse of the British prime minister at the time [Cherie Blair]. She was proud of her discretion and was constantly concerned not to appear to play a public political role.”

On Thursday, the investigation into the fake jobs scandal was extended to the Fillons’ children, Marie (34) and Charles (32), who were paid €84,000 as assistants to Fillon from 2005-2007. They will be questioned in coming days.

If the “Penelope-gate” scandal had occurred in any other country, French media have observed repeatedly, the Les Républicains (LR) candidate would have been forced to withdraw from the race immediately.

Ms Fillon “resigned” from her phantom career as a parliamentary assistant on November 30th, 2013, a month and a day before a new law on transparency in political life took effect.

The perception of Mr Fillon, who was portrayed as an honest country gentlemen when he won the nomination last November, has altered radically since the scandal broke.

Parliamentarians report that party volunteers are refusing to distribute leaflets on Fillon’s behalf. Alluding to Fillon’s public professions of faith, a member of a ministerial cabinet said the candidate was “like a devout Catholic who steals from the collection plate”.

The investigative website Mediapart cited a source close to former president Nicolas Sarkozy for its report on how Fillon’s website is “siphoning” donations from his campaign to his “micro-party,” the Association for the Financing of Force Républicaine (AFFR).

Fillon and Sarkozy have disliked each other since Fillon served as Sarkozy’s prime minister. Although Fillon accuses the socialist government of leaking the story, there is widespread speculation that he was betrayed by Sarkozy, Jean-François Copé or Rachida Dati, fellow LR officials with whom he has feuded.

Sarkozy may be positioning himself to replace Fillon as the LR nominee. He has been consulting furiously with acolytes, and refused to sign an open letter by 17 prominent LR politicians in Thursday’s Le Figaro condemning “rumours, approximations, calumnies” that have “thrown [Fillon] to the wolves”. The politicians expressed “total support” for the candidate.

Fillon’s misfortunes have given new hope to the socialists. Benoît Hamon, who won the Socialist Party nomination last Sunday, gained 14 points in a poll for the Figaro Magazine, with 33 per cent of respondents saying they “would like to see him play an important role in the months and years to come”.

The current president, Mr Hollande, has reportedly told visitors he now believes the left can win the election.

1 Covid-19: One death and 363 further cases confirmed in State
2 ‘Insane’ gathering of hundreds of students in Galway condemned
3 Ireland will not be Brexit ‘collateral damage’, says Coveney in Washington
4 Prepare for six to nine months of Covid-19 restraints, warn health officials
5 Speed and distance of Covid-19 droplets tracked by Mater researchers
Real news has value SUBSCRIBE