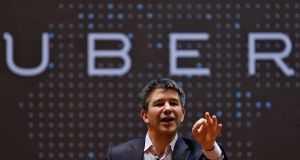 The CEO of the ride-hailing service had been under mounting pressure from activists who oppose the administration’s immigration policies, including Uber drivers, many of whom are immigrants themselves.

“Joining the group was not meant to be an endorsement of the president or his agenda but unfortunately it has been misinterpreted to be exactly that,” Mr Kalanick, who had planned to attend a meeting of the advisory group on Friday, said in an email to staff that was seen by Reuters.

Uber spokeswoman Chelsea Kohler later confirmed that he had left the group.

The company this week has been emailing users who deleted their accounts to emphasise that it shares concerns about Mr Trump’s immigration orders and its efforts to compensate drivers affected by the Muslim travel curbs.

Mr Kalanick said he had spoken briefly to Mr Trump about the immigration order “and its issues for our community”.

The CEO came under increasing pressure to leave the council after Mr Trump issued an executive order temporarily barring people from seven majority-Muslim nations from entering the US.

“There are many ways we will continue to advocate for just change on immigration, but staying on the council was going to get in the way of that. The executive order is hurting many people in communities all across America,” he wrote in the note to employees.

“Families are being separated, people are stranded overseas and there’s a growing fear the US is no longer a place that welcomes immigrants.”

The move could put pressure on other CEOs expected to attend a meeting with Mr Trump on Friday.

Others expected to take part include the CEOs of JPMorgan Chase, Blackstone Group, IBM and Wal-Mart Stores.