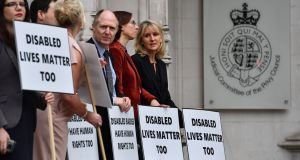 Anti-abortion demonstrators protest outside the supreme court in London before it ruled on an appeal against Northern Ireland’s abortion laws. Photograph: Ben Stanstall/AFP/Getty Images

The opinion of a majority on the UK supreme court that Northern Ireland’s ban on abortion, even in cases of rape, incest and fatal foetal abnormality, breaches human rights is not a binding decision.

The court’s essential decision was to reject the appeal by the Northern Ireland Human Rights Commission (NIHRC) on the grounds that the commission had no standing to initiate the proceedings and there has been no formal declaration of incompatibility with the European Convention on Human Rights (ECHR).

“But it must be forthrightly stated and plainly understood that a clear majority of this court has reached the view that the law on abortion in Northern Ireland, insofar as it relates to fatal foetal abnormality, is not compatible with article 8 of the ECHR. Indeed it should be noted that the minority on this point did not positively say that the present law is compatible with the ECHR, but rather that the form of the present proceedings did not enable them to conclude that it is not,” Lord Kerr said.

A majority also found that the ban on abortion in cases of rape and incest breaches the convention.

The testimony of women who have suffered on account of Northern Ireland’s abortion law played an important part in the court’s deliberations and the majority concluded that the interference in the private and family life of a woman carrying a foetus with a fatal abnormality could not be justified as necessary in a democratic society by forcing her to carry the pregnancy to term.

“Put simply, the balance cannot come down in favour of a law which imposes that experience on a woman. Quite apart from other considerations, the imposition of such a law fails to give any weight to the personal autonomy of a woman and her freedom to control her life,” Lord Kerr said.

The judgment comes two days after an emotional, three-hour debate in the House of Commons about changing Northern Ireland’s abortion law.

The anti-abortion DUP found few allies to endorse the justice of Northern Ireland’s abortion regime but some Conservatives and Scottish Nationalists agreed that Westminster should not act because abortion is a devolved issue.

The supreme court has knocked away that prop by making clear that Northern Ireland’s abortion law is a human rights issue.

And human rights are the responsibility of the British government and the Westminster parliament.