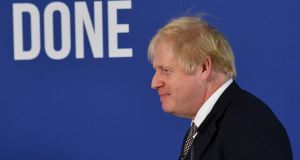 British and European Union negotiators enter a crucial round of talks on Monday as a House of Lords committee warns that uncertainty about how future arrangements in Northern Ireland will work is a risk to peace and prosperity.

In a report on the Northern Ireland protocol published on Monday, the Lords EU committee says that seven months before the end of the post-Brexit transition period, there is “a very high level of anxiety” among stakeholders in the North.

“The combination of uncertainty, lack of momentum and lack of time, compounded by the shock of the Covid-19 pandemic, is a potent threat to economic prosperity and political stability in Northern Ireland,” it says.

Negotiators in London and Brussels will meet by videoconference on Monday at the start of the final round of negotiations ahead of an as yet unscheduled meeting between Boris Johnson and European Commission president Ursula von der Leyen.

The two sides remain far apart on a number of issues including fair competition commitments, fisheries and the governance of any agreement, and both are pessimistic about the prospects of a breakthrough this week.

Charles Kinnoull, chairman of the Lords EU committee, said there was a danger that the deadlock in talks about the future relationship was preventing the two sides from agreeing on how to implement the Northern Ireland protocol.

“I suppose what we’re really saying to the two parties is: we know that very important discussions are going on and this is not part of that. But really the machinery for getting stuff resolved within the protocol needs to get going now,” he said.

The report criticises the British government’s recent command paper on the protocol for lacking important detail and for using the future tense about actions which should be taken now. But it warns that the EU’s emphasis on the immutability of its own rules has left Northern Ireland businesses fearing that there will be no flexibility in how the protocol is applied.

“The protocol must ultimately be viewed through the lens of the peace process, and therefore judged by the impact it has on the people, communities and economic prosperity of Northern Ireland and Ireland,” it says.