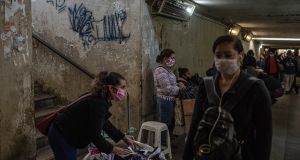 The number of confirmed deaths from coronavirus globally has topped 400,000, as the Chinese government released a report lauding its response to the pandemic that first emerged in the city of Wuhan six months ago.

As more countries prepared to continue easing their lockdowns from Monday, Singapore’s prime minister warned the city-state’s citizens they were entering a tougher world of slowing demand and travel restrictions for the foreseeable future.

The lengthy report released by Beijing on Sunday said China had “wasted no time” in sharing information such as the virus’s genome sequence with the World Health Organisation (WHO) and other governments.

Its claim contrasts with criticism from US leaders and in records from internal WHO meetings published by the Associated Press last week that Beijing was slow to release key information needed to develop tests, drugs and a vaccine.

“The Chinese government did not delay or cover up anything,” said the national health commission chairman, Ma Xiaowe. “Instead, we have immediately reported virus data and relevant information about the epidemic to the international community and made an important contribution to the prevention and control of the epidemic around the world.”

More than a quarter of the world’s death toll is from the US, with more than 40,000 deaths in the UK and more than 30,000 in Brazil and Italy each making up the next quarter as the weekend. Total infections are approaching seven million.

Tensions between the US and China have escalated as a result of the pandemic, with the Republican senator Rick Scott sparking a fresh row on Sunday when he claimed Beijing was meddling in the search for a vaccine, “trying to sabotage us or slow it down”. He told the BBC’s Andrew Marr Show his information came from “our intelligence community” but presented no evidence or further details.

About six months since the first reports of the virus started emerging from southern China, regions in the world were at starkly different stages of their fight against it. On Sunday, China downgraded the danger from the virus in its north-east Jilin province to low, meaning nowhere in the country was any longer considered at high risk of an outbreak.

Parks in Turkey and streets in Jordan were full as both countries relaxed their onerous lockdowns under economic pressure, while France opened the Château de Versailles to the public on Saturday for the first time in 82 days.

Meanwhile, countries such as India and Brazil, which weeks ago appeared to be avoiding serious outbreaks, were struggling to contain their caseloads. “Delhi is in big trouble ... corona cases are rising rapidly,” the Indian capital’s chief minister, Arvind Kejriwal, said in a video message on Twitter, in which he announced that private and city government-run hospitals would be reserved for Delhi residents.

India on Sunday registered 9,971 new coronavirus cases, taking the country’s tally to 246,628, with 6,929 deaths. The case numbers lag behind only the US, Brazil, Russia, UK and Spain.

“If we open Delhi hospitals for patients from all over, where will Delhi residents go when they get infected with coronavirus?” Mr Kejriwal said. Typically about 60-70 per cent of patients admitted to hospitals in Delhi are people traveling from other states to get treatment as the city’s hospitals.

Other countries, such as Iran and Panama, were dealing with a resurgence of the virus after seemingly turning the corner. Panama announced on Saturday it would reintroduce restrictions on the movement of people in two provinces following an increase in the number of new cases.

Iran said its fresh cases were a result of wider testing. “The main reason for rising numbers is that we started identifying [people] with no or light symptoms,” said the health ministry’s head epidemiologist, Mohammad-Mehdi Gouya.

Singapore’ prime minister, Lee Hsien Loong, said in a televised address on Sunday that his country needed to prepare for a more difficult future with greater unemployment and less global trade and travel.

“Countries will have less stake in each other’s wellbeing,” Loong said. “They will fight more over how the pie is shared, rather than work together to enlarge the pie for all. It will be a less prosperous world, and also a more troubled one.”

Pope Francis broke from his prepared text in an address on Sunday, warning Italians to not let their guard down against coronavirus now that infection rates had fallen, and urged them to obey government rules on social distancing and the wearing of masks.

Francis, addressing several hundred people in St Peter’s Square for his Sunday blessing, reacted to applause that broke out when he said their presence, albeit reduced, was a sign that Italy had overcome the acute phase of the pandemic.

“Be careful. Don’t cry victory too soon,” he cautioned them. – Guardian/agencies