Netherlands’ ‘burka ban’ set to unravel before it begins 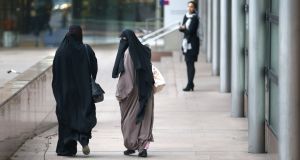 A burka ban – first proposed in 2010 – is scheduled to come into effect in The Netherlands on Thursday, August 1st. Photograph: Jerry Lampen/AFP

Two days before it even comes into effect, the Netherlands’ new “burka ban” has been rendered largely unworkable by operational decisions by police and public transport staff not to support its implementation.

The ban – first proposed in 2010 as a stratagem to persuade right-wing politician Geert Wilders and his Freedom Party to support a minority coalition government led by prime minister Mark Rutte – is scheduled to come into effect on Thursday, August 1st.

The Partial Ban on Face-Covering Clothing Act will apply in all public buildings – schools, hospitals and universities, for instance – as well as on public transport, but not, crucially, in the street. Crash helmets and ski masks will also be banned, but not headscarves where the face is visible.

Infringements will carry a fine of €150 – but it now looks likely that there will be very few, if any, penalties imposed.

The killer blow to the legislation came on Monday when transport companies said they would not be in a position to give effect to the ban – because the police had told them officers would not be able to respond to calls to trains, metros, trams or buses within half an hour.

“The police have told us the ban is not a priority and that therefore they will not be able to respond inside the usual 30 minutes, if at all,” said transport spokes man Pedro Peters.

“This means that if a person wearing a burka or a niqab is challenged trying to use a service, our staff will have no police back-up to adjudicate on what they should do. It is not up to transport workers to impose the law and hand out fines.”

On that basis, the transport providers have briefed “frontline staff” only to go as far as asking, “Are you aware that it is illegal to wear face-covering clothing on public transport?” Having made that point, nobody is to be refused entry, they’ve been told.

In any case, said Mr Peters: “Veils have never been a problem. When we ask for proof of identity to match a travel card, women always lift their veils for a few seconds to show their faces.”

That is also the view of the Council of State, which points out that only between 200 and 400 out of a population of 17 million wear the burka or niqab. It has described the ban as unnecessary, implying a non-existent urgency, and says it “risks infringing the constitutional right to freedom of religion”.

On that basis, the three major cities of Amsterdam, Rotterdam and Utrecht are expected to turn a blind eye to the new law.

“It is simply not fitting in our multiethnic communities,” said Amsterdam’s mayor, Femke Halsema.