Hong Kong authorities step up security around China's main representative office as protests break out, with anger among the crowds simmering over what many see as an increasing cycle of violence against them. Video: Reuters 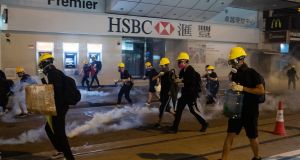 Demonstrators walk past tear gas during a protest in the Sheung Wan area of Hong Kong on Sunday. Photograph: Kyle Lam/Bloomberg

China reiterated on Monday its support for Hong Kong’s leader, Carrie Lam, and its police, and called on Hong Kong people to oppose violence following another weekend of clashes between protesters and police in the city.

Hong Kong bore the scars on Monday of its eighth straight weekend of violent protests, with hard hats, umbrellas and water bottles littering some central streets.

Huge crowds have taken to the streets to protest against a now-suspended extradition bill that would have allowed criminal suspects in Hong Kong to be sent to China to face trial in Communist Party-controlled courts.

The protests have at times paralysed parts of the financial district, shut government offices and disrupted business operations across the city. Officials have also warned about the impact of the unrest on Hong Kong’s economy.

Beijing has stood by Ms Lam, and the Chinese government’s Hong Kong and Macau Affairs Office, which has cabinet-level authority over the former British colony, reiterated that support at a news conference in Beijing.

“We especially appreciate and empathise with Hong Kong police forces and their families for the huge pressure they are bearing,” he said.

The most important thing was for Hong Kong to handle the unrest according to the law, Mr Yang said, blaming “irresponsible people” in the West for stirring up trouble in a bid to “contain China’s development”.

Such efforts would fail, he said.

The briefing was the first held by the office specifically to address the Hong Kong protests, and a moderator at times chided journalists who shouted out questions, telling them not to interrupt.

Mr Yang, asked under what conditions the People’s Liberation Army (PLA) could intervene, referred, as other officials have done, to Hong Kong’s mini constitution, known as the Basic Law, which states that the Hong Kong government can ask the PLA garrison in the city to help maintain order.

Mr Yang said Hong Kong’s government and society needed to find more effective ways to help young people address concerns over housing, employment and other issues, although officials did not announce any specific measures to address the unrest.

The protests are the most serious political crisis in Hong Kong since it returned to China 22 years ago. They also pose the greatest popular challenge to Chinese leader Xi Jinping since he came to power in 2012.

Hong Kong returned from British to Chinese rule in 1997 under a “one country, two systems” formula that promised wide-ranging freedoms denied to citizens in mainland China.

Many fear Beijing is increasingly chipping away at those freedoms.

The past weekend saw more clashes between protesters and police, who again fired rubber bullets and tear gas as the demonstrations grow increasingly violent.

Police sought to defend China’s main representative office in Hong Kong from protesters on Sunday for the second consecutive weekend, with the building near the heart of the city fortified with barricades.

Police said they had arrested at least 49 people over Sunday’s protests for offences including unauthorised assembly and possession of offensive weapons.

What began as a movement to oppose the extradition law has taken on broader demands. They include Ms Lam’s resignation, calls for full democracy, and an independent inquiry into what some say has been excessive force used by police against protesters.

Ms Lam has refused to accede to any of the demands. – Reuters