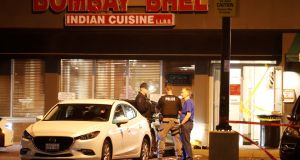 Canadian police were looking for two suspects who walked into a crowded restaurant Thursday night and detonated a bomb, injuring 15 people, but police said on Friday the incident did not appear to be a hate crime or linked to international terror.

The blast went off in a popular Indian restaurant in Mississauga, a city west of Toronto, at about 10.30pm local time on Thursday. Security camera footage showed two men entering the restaurant, one carrying an object.

“There’s no indication this is a terrorist act, no indication this is a hate crime at this time,” Peel police chief Jennifer Evans told reporters on Friday. The explosion caused “a considerable amount of damage,” Ms Evans said, adding there were two private birthday parties at the restaurant at the time, with children under 10 in attendance. There were no children among the injured.

Three people were critically injured, but by Friday morning, their condition was upgraded to stable, Ms Evans said. Another 12 people ranging from 23 to 69 years of age suffered minor injuries.

The two male suspects fled after detonating the improvised explosive device, police said. No one has claimed responsibility and the motive for the attack was still not known.

Prime minister Justin Trudeau said in a post on Twitter: “We’re in solidarity with the victims of this violence, and wish a swift recovery to the injured. We’re working closely with police and officials in Mississauga on this.” – Reuters