Michel Barnier ‘not optimistic’ deal can be reached with UK 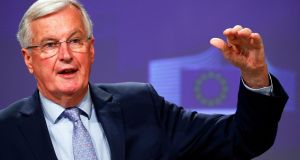 EU chief Brexit negotiator Michel Barnier: “I’m still determined but I’m not optimistic, given the incomprehension on the British side of the conditions of access to our market.” Photograph: Francois Lenoir/EPA

There was little progress in this week’s round of negotiations on the future trade relationship between Britain and the European Union, leaving chief EU negotiator Michel Barnier “not optimistic” that a lurch to damaging default trade terms can be avoided at the end of the year.

The pound sunk at the prospect negotiators could fail to reach a deal, which is forecast to deliver a deep blow to the British economy and that of close trading partners such as Ireland, which would compound the historic slump triggered by the coronavirus pandemic.

The British government has just weeks left before the deadline to request an extension to the transition period, under which it is retaining the same trade terms with the EU as it had when it was a member of the bloc.

If a deal cannot be struck, Britain will automatically begin trading with the EU on default World Trade Organisation terms on January 1st next year.

Mr Frost blamed the EU for the lack of progress in the negotiations, identifying the demand for “level playing field” commitments as the biggest obstacle .

The EU insists that British companies cannot be granted easy access to the single market unless the UK agrees not to give them an unfair advantage over EU counterparts through state aid or tax deals. It wants protections of environmental standards and labour rights to be part of the deal, to avoid British industry undercutting EU competitors.

Mr Frost said such commitments would bind Britain to EU laws and standards in a way that is unprecedented in other free trade agreements.

“It is hard to understand why the EU insists on an ideological approach which makes it more difficult to reach a mutually beneficial agreement. We very much need a change in EU approach for the next round beginning on June 1st. In order to facilitate those discussions, we intend to make public all the UK draft legal texts during next week so that the EU’s member states and interested observers can see our approach in detail,” he said.

Both sides agreed that there had been slight movement on the issue of fisheries, where each had begun with polar opposite positions, the EU advocating for a continuance of the status quo and Britain insisting it would reclaim exclusive rights for its fishing industry alone in its territorial waters.

Talks on finding a compromise will resume in the next round of negotiations, which begin on June 1st.

Britain will next week publish the draft legal texts it has shared with EU negotiators but not with member-state governments. It will also publish a document outlining how it plans to implement the Northern Ireland protocol.

A senior British official close to the negotiations said this week’s talks were “a bit tetchy at times”, adding that Mr Barnier was doing a good job but was burdened with a negotiating mandate that was not negotiable with Britain.

“The problem continues to be that the EU think that they can get a halfway house between what we’re willing to see on so-called level playing field and what they’re willing to see, what we’re willing to live with on fisheries and what they’re wanting to see. We tried to make clear from the start that there isn’t a halfway house. You can’t split the difference between areas where we control our own laws and that’s a fundamental difficulty that the EU has not yet accepted,” the official said.

After weeks of stalemate and a tight negotiating timetable that was curtailed further by the coronavirus pandemic, calls have grown for Britain to request an extension to the transition period to give the talks more time, which survey data indicates has majority public support.

The British Irish chamber of commerce appealed to the government of prime minister Boris Johnson to buy time so that businesses were not burdened with tariffs and regulations while at their “most vulnerable”.

The British government has insisted it will not ask for an extension, and last week cabinet minister Michael Gove said that tariffs were a “price” London was willing to pay.