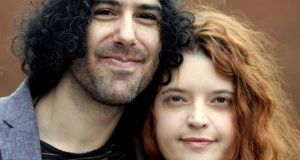 Emma DeSouza and her husband, Jake, said they know a number of families who will benefit from this change. Photograph: Justin Kernoghan/ Photopress

Every person born in Northern Ireland will be regarded as a European Union citizen for immigration purposes, following a significant climbdown by the British Home Office.

Emma DeSouza from Magherafelt in Co Derry had fought a lengthy legal immigration battle to allow her US-born husband, Jake, stay in Northern Ireland, without compromising her to identify as an Irish citizen.

However, the Home Office rejected the couple’s application deeming that Ms DeSouza was British, notwithstanding her argument that she never held a British passport.

Now however, the Home Office has changed its rules so that Mr DeSouza can seek UK residency while his wife continues to identify solely as Irish.

Expressing delight at the outcome, the couple said the Home Office had finally brought its rules into line with last January’s New Decade, New Approach deal that restored the Northern Executive and Assembly.

The Home Office had requested Ms DeSouza either apply for residency for her husband as a British citizen or renounce her British citizenship and apply as an Irish citizen.

Ms DeSouza challenged that decision, stating that she had never held a British passport and citing how the Belfast Agreement allowed her to identify as Irish, British or both.

In October the Home Office won an appeal against an immigration tribunal case that had originally upheld Ms DeSouza’s right to declare herself as Irish, without first renouncing British citizenship.

Ms DeSouza, who marred in Belfast in July 2015, applied under her Irish passport for a residence card for her husband in December that year.

“This delivers on the commitment the UK government made in the New Decade, New Approach agreement in January 2020 which restored the power sharing Executive in Northern Ireland,” the Home Office said in a statement on Thursday.

The rule changes, which Tánaiste Simon Coveney has pressed for, mean that all British and Irish citizens born in Northern Ireland will be treated as EU citizens for immigration purposes. The rule changes are due to expire in June next year.

Mr DeSouza now will be permitted to remain in the UK indefinitely if he applies for residency under the EU settlement scheme.

Ms DeSouza said she and her husband were “delighted to see the British government move to fulfil their commitment to change the immigration rules as outlined in the New Decade New Approach deal”.

“These changes are on the back of years of campaigning for the full recognition of our right to be accepted as Irish or British or both under the Good Friday Agreement,” she said.

“We have always contended that no one should be forced to adopt or renounce a citizenship in order to access rights. To do so goes against both the letter and the spirit of the Good Friday Agreement. I am an Irish citizen and have the right to be accepted as such. The Home Office now concedes that point.”

She said the rule changes “will have a positive impact on families across Northern Ireland and will provide a route to family reunification under the EU regulations whether that person identifies as Irish or British or both”.

“We personally know a number of families who will benefit from this change and are filled with joy and relief that these families will not face calls to renounce British citizenship or face years in court like we have,” said Ms DeSouza.

Sinn Féin senator Niall Ó Donnghaile said the decision was a “victory” for the DeSouzas. Changing the rules clearly showed “that there are distinct political, historic and societal differences here – the very reason we have the Good Friday Agreement in the first place”, he said.

“Many of us are concerned, however, with the time-limited nature of today’s announced changes – they only run until the end of the transition period – and more broadly with the British government’s continued failure to address our citizenship and identity rights by codifying the GFA provisions within their own domestic law,” he added.