Mesut Özil: Is it because I’m a Muslim? 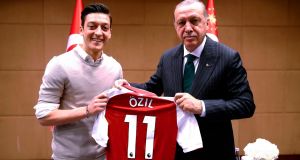 They call it the Affenkäfig, the monkey cage: a dusty, inner-city football pitch behind a high green fence in the western Germany city of Gelsenkirchen.

With weeds poking up through the gravel and abandoned shopping trolleys at the edges, it’s where local youths play ball and talk – often joined by older neighbours. This week, as so often, they were talking about Mesut Özil.

Karl-Heinz Hassmann remembers watching Özil play here as a youth, honing his talent in six- and seven-hour stretches at a time to become one of Germany’s best footballers – and now its most notorious.

“People were looking for a scapegoat for this affair and Özil fit the bill,” he said.

The affair began in London last May when Özil met Turkish president Recep Tayyip Erdogan at a charity event in London.

When photos of the meeting were published online by the Erdogan election campaign, Özil – a media favourite and idol in the German-Turkish community – was accused by German politicians and journalists of endorsing an authoritarian leader weeks before a poll in which Turks living in Germany could – and did – vote for him en masse.

A series of crisis meetings followed, including with the German president, but Özil declined to comment. His silence sparked further fury and overshadowed his disappointing World Cup.

This week came from the player a remarkable 2,200-word statement attacking what he sees as racism, disrespect and double standards in the German football association (DFB) and German society. The statement ended with the announcement he would no longer don the German national jersey.

“I used to wear the German shirt with such pride and excitement, but now I don’t,” he said.

Özil said his decision to meet president Erdogan was a sign of respect for the Turkish head of state.

“My job is a football player and not a politician, and our meeting was not an endorsement of any policies,” he said.

He then let fly at the German football association (DFB) and the German media, accusing them of racism and double standards for singling him out for criticism.

Former German World Cup captain Lothar Matthäus was not criticised for meeting Russia’s Vladimir Putin, he pointed out, while other national players like Lukas Podolski are not constantly confronted with their family’s foreign roots.

“Does my Turkish heritage make me a more worthy target?” he asked. “Is it because it is Turkey? Is it because I’m a Muslim? . . . By being referred to as German-Turkish, it is already distinguishing people who have family from more than one country.”

With his angry statement he was clearly venting years of pent-up frustration. It was also a masterstroke of PR reframing.

Germans are no longer discussing whether they accept his reasons for meeting a statesman who has overseen a mass wave of firings and imprisonment of critics he dubs “terrorists”.

Instead Germans are talking about race and identity in an era of rising nationalism exploited by politicians, not least president Erdogan, around the world.

After weeks on the back foot, the Arsenal footballer has kicking a primed grenade, with perfect precision, directly at an Achilles heel of German life: integration.

In 1999 Mesut Özil was 11-years-old and probably kicking a ball around his neighbourhood pitch when, 500km to the east, the Bundestag passed a new law revolutionising German citizenship. Until then, people born here to non-German parents did not have an automatic right to German citizenship, even if they lived here their entire lives. People like Mezut Özil, whose grandfather came to Germany 48 years ago as a Gastarbeiter, a “guest worker”.

The SPD-Green government changed the citizenship rules in 1999 to reflect the new reality: the “guest” workers had made new homes in Germany and were now and parents and grandparents. But the bureaucratic change was never matched by a campaign to change public attitudes.

The Özil row has exposed as unresolved a dangerous gap between law and perception about who qualifies as German, and who doesn’t.

The row has the potential to undermine the last dozen years of social peace since the German “summer miracle”, when millions of World Cup fans in Germany experienced a nation at peace with itself – not a given considering the ghosts of the past.

The World Cup victory of 2014 sealed the deal; with the trophy brought home by a team of young, fleet-footed multicultural players like Mesut Özil. The message was clear: it doesn’t matter if your surname has German or Turkish umlauts, if you play by the team rules, you’re welcome.

After the World Cup disaster, crashing out in the first round, Özil says he was bombarded with hate mail. In the stadium after the World Cup match against Sweden, he said a German fan in the stands attacked him as a “shitty Turkish pig”.

“I am German when we win, but I am an immigrant when we lose,” he wrote.

Germany’s mixed feelings – and signals – on immigration are reflected in the the ruling Christian Democratic Union (CDU).

Until a decade ago the party denied the obvious and insisted Germany was “not a country of immigration”. When that position was no longer credible, Angela Merkel switched to a new message: multiculturalism has failed. The people who the CDU once denied were there now must pledge unfailing loyalty to a state the CDU ensured denied their right to citizenship.

That was why Özil, in his statement, said it was “unforgiveable and unforgettable” how DFB chief Reinhard Grindel, in his time as a CDU Bundestag MP, called multiculturalism a “lifelong lie”.

Instead of the CDU acknowledging its contribution to a sense of alienation among Germans with migrant roots, Angela Merkel’s party backed a motion in 2016 to strip Germans with a second, non-EU passport, of their right to dual citizenship.

“I don’t think the case of a multimillionaire living and working in England says much about Germany’s ability to integrate people,” he said.

The media is also divided. The left-wing Taz thanked Özil for forcing a debate on integration in Germany, while the Bild tabloid’s hypercritical coverage of the Özil affair climaxed in a front-page headline: “Whinging Retreat”.

It’s clear Germany is already a house divided as it faces into a fresh round of its tortured integration debate – this time in a changed world.

Even as Özil and his team-mates brought the World Cup home in 2014, Germany was in the middle of a migration crisis. Over one million people arrived in Germany in the subsequent two years. The initial warm welcome towards migrants has cooled, thanks in part to a series of violent attacks and murders carried out by migrants.

The rise of the far-right Alternative für Deutschland (AfD) means racism and xenophobia – implied or explicit – are no longer taboo in public debate.

Testing his dog whistle a year ago, AfD leader Alexander Gauland suggested no German was interested in having as a neighbour anyone with a name like Özil’s team-mate Jerome Boateng.

The remark sparked uproar, but not among all. Before this year’s World Cup, far-right groups posted sarcastic remarks on social media wishing well the 2018 side of players with names like Özil, Khedira, Mustafi, Boateng, and making sneering comparisons to previous national sides with more German-sounding players like Beckenbauer and Ballack.

Until May 29-year-old midfielder Özil was the Wizard of Öz, a boy made good whose talent was a passport out of a city marked by structural decline. After playing for Schalke 04 in the Bundesliga he left Germany, first for Real Madrid, then Arsenal.

For fellow Germans with Turkish roots still in Germany, his statement has struck a chord. Germany is no America, they complain; there are no clear club membership rules and, no matter what effort you make, one slip will see you excluded.

That in turn infuriates other Germans with Turkish roots like the young author and blogger Tubia Sarica.

She fears Özil’s racism accusations will only magnify a victim mentality she sees in the Turkish-German community towards the “bad” Germans.

“It’s easier to keep intact the image of the bad German because then you give away responsibility for yourself,” she said. “Erdogan has recognised this victim complex . . . and instrumentalised it for himself.”

As the dust settles, it’s likely the final act has yet to play out in the Mesut Özil tragedy. In his family’s ancestral home in Devrek, a giant poster of the jerseyed player was replaced this week with the controversial photograph of him with Mr Erdogan.

The Turkish president, in a phone call with the footballer on Monday evening, praised his “patriotism”.

For the 29-year-old German citizen to retire from international football, it is a snub to his homeland, a disastrous signal for German integration and, for president Erdogan, a propaganda coup.