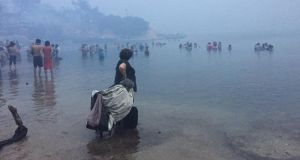 People stand by the shore as a wildfire burns in Mati, Greece on Monday. Photograph: Kalogerikos Nikos/via Reuters

They nearly reached the water. As wind-fuelled wildfires that killed at least 76 people in holiday areas outside Athens bore down on their seaside resort, 26 men, women and children gathered in the hope that they could find the narrow path leading to a small staircase down to the water.

The gated entrance stood only a dozen paces away, but with smoke blotting their vision and choking their lungs, they appear to have lost their way. Officials found their bodies the next day, Tuesday; several were still clinging to one another.

At sunset, a glasses case, a belt buckle, the carcasses of dogs and the shells of mobile phones dotted the still-smouldering field where they fell. Amid the burned pine cones and the naked trees, leaning as if slammed by a nuclear wind, lay a large leather sandal and a small blue one with a Velcro strap.

All around were the discarded blue rubber gloves of the emergency workers who carried the bodies away.

Greece, a country that understands tragedy all too well, woke on Tuesday morning to its worst one in a decade. In addition to those killed by smoke or fire, or who drowned in the sea while trying to flee, 187 people were hospitalised, more than 20 of them children. Ten people remained in serious condition, the government said on Tuesday night.

The fires forced the evacuation of thousands of tourists, as well as residents and retirees, from this holiday area about 30km east of Athens. Flames were still licking at the fields of Kineta, about 50km west.

“We will do whatever is humanly possible to control it,” Greece’s prime minister, Alexis Tsipras, said in a televised statement on Tuesday as he announced a state of emergency in the Attica region, which includes Athens.

The government, which has declared three days of mourning, dispatched forces from the army, coast guard and fire brigades. It has also called in help from the European Union to quell the fires.

“We mustn’t let mourning overwhelm us, because these hours are hours of battle, unity, courage and above all solidarity,” Tsipras said.

The acrid smell, wafts of smoke and pools of incinerated rubbish lent this seaside community an apocalyptic air on Tuesday. The streets were slicked black and police lights reflected off the broken windows as tow truck operators raised and lowered the ashen remains of burned cars onto flatbed trucks.

Elena Apostolov, a pet store owner, walked around with an empty pet carrier. “We’ve found nothing,” she said. Danae Koliou (23) sidestepped dead bodies in the morning and picked up an abandoned mobile phone with 48 missed calls. Firefighters wore gas masks and rescue workers collected bags of crackers, Argos orange juice, bread and Choco Balls cereal for the hungry survivors, many of whom had lost everything.

“Everything is bad,” said George Roumeliotis, the president of the local civil protection task force. He paused to yell over to colleagues in orange shirts to start bringing food to other sites. “We have dead,” he said, “we have people looking for their friends and their family.”

Residents said the flames had come fast. “There was a smell of smoke, but just the smell,” said Antonis Tsiongios, a 60-year-old plumber who had a holiday property here. “And then two hours later, the fire was here.”

By then, he said, it was too late to escape. The street out of town was clogged with cars and engulfed in flames. “The only road,” he said, “was the sea.”

Tsiongios pointed at a narrow pass, beyond a slumped cactus plant, where he said more than 100 people had struggled to get to the rocky beach below. He made it out, he said, and waded in the water until the fires were extinguished. But a friend’s elderly mother did not make it, he said, and is missing.

Some people swam out hoping that boats would come to their rescue. Some were plucked from the sea by fishermen, while others clung to makeshift rafts before the coast guard arrived. Twelve coast guard vessels, aided by private boats, rescued dozens of people from the sea and helped evacuate about 800 people trapped on the beaches of Mati and nearby Kokkino Limanaki, officials said.

But the sea, too, took its toll. Some residents swam to safety, only to see their neighbours drown. Others treaded water for hours, their eyes burning from smoke, until fisherman pulled them aboard.

Vaios Kiriakis, a 50-year-old school fitness instructor, said he first smelled smoke on Monday afternoon at his home in nearby Rafina, and then saw the flames from his terrace. Within hours, Kiriakis said, he, his wife and 12-year-old son fled with some money and waterproof jackets to a beach near the port.

“You could see the fire coming toward you at great speed, and there’s nothing you can do but leave,” he said.

The family watched the black and white smoke of the fires rise as they consumed trees and cars and houses. At 3am, he said, the fires burned out and he returned to find that the flames had stopped 100 metres from his house.

The death toll of 80, Greece’s worst since wildfires killed 60 people in the country’s Peloponnese region in 2007, seemed likely to grow as the authorities began the grim task of inspecting the torched cars and wrecked homes in which some evacuees sought escape or refuge, only to find themselves trapped.

Evangelos Bournous, the mayor of the Rafina-Pikermi area, told reporters he had seen flames engulf more than 100 homes. “It is a total catastrophe,” he said.

Politicians here have already started casting blame and whispering about arson. A supreme court prosecutor ordered an investigation and Tsipras said the extent of the fires seemed suspicious. Sceptics brought up the lack of funds for forest maintenance and the disregard for zoning laws.

But on Tuesday, as the winds died down and billowing clouds replaced thick smoke, all of that seemed far off. Instead, what was left was the awful evidence of a beach holiday that ended in unimaginable tragedy.