Merkel to Athens: now take responsibility for what you agreed 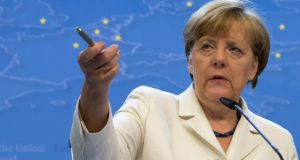 German chancellor Angela Merkel giving a final press conference at the end of a eurozone leader summit on the Greek crisis in Brussels. Photograph: Ian Langsdon/EPA

Tired but unemotional, German chancellor Angela Merkel strode into the Brussels pressroom. After 16 hours locked in talks, she was here to present her victory over Greece.

Only her eyes, a little glassier than usual, suggested that Dr Merkel had just come out of an all-night game of high-stakes euro poker, following seven months of Syriza strife and a week of post-referendum uncertainty.

The German leader got straight down to business, presenting a long shopping list of reform measures to the press, from VAT hikes to pension reform, many of which Greece must get through its parliament within 48 hours or forfeit today’s deal.

Only if laws are passed in the agreed timeframe, she added, could the chancellor “wholeheartedly” ask the Bundestag to give her government a mandate to negotiate a third aid programme.

Dr Merkel’s long list seemed to contain almost every point agreed by finance ministers 24 hours previously. It was a balanced list, she added, where the benefits outweigh the drawbacks.

But where, she was asked, are the Greek fingerprints on the agreement? Have European leaders, 96 years on, just agreed a new Versailles Treaty? “The Greek fingerprints are there in the form of the high level of financing needs,” remarked Dr Merkel drily, to titters from the German press. “I won’t participate in historical comparisons, particularly ones I didn’t make myself.”

And what was the atmosphere like at the talks – a marathon succession of larger and smaller negotiation rounds? “Remarkably businesslike given their length”, she said. “But we know that paper doesn’t refuse ink and it depends now on implementing what we agreed tonight.”

Trust has to be rebuilt was her message to Athens: take responsibility for what you have agreed. For Greece, taking responsibility means a dash back to Athens and try and sell a raft of legal measures, from VAT hikes to pension reform, in just 48 hours to a mutinous coalition.

But, under this plan, Greece has no time for mutiny or risk forfeitting its credit lifeline – and euro membership. A raft of “prior actions” have a deadline of July 15th and only when Greece is given a certificate of compliance from its creditor institutions that all pre-conditions have been met this week can the Bundestag even consider a new application for a three-year aid programe, the German leader warned.

Further reforms must be passed next week, including a transposition into national law of an EU directive for bank wind-ups.

The programe is vast, the scope ambitious. A particularly controversial element – one that cost many hours of talks in the night – is a privatisation fund, with a “targeted total” of €50 billion. Greece’s creditors want Athens to hand over ownership of assets to a trustee fund for sale. Half of the proceeds will be used to pay back Greek debt, a quarter for bank recapitalisations and the other quarter for direct investment in Greece. Athens argued that it could raise assets only worth €17 billion, no more. The final wording appears to be a compromise.

So what lies ahead for Greece in the coming days? Only if Athens ticks all the boxes it has signed up to and implements them in the ambitious timeframe agreed, will eurogroup leaders look at making Greek debt more sustainabile. And even then, it will only involve longer grace periods for Greek debt – a proposal agreed in November 2012.

To avoid any confusion about what was on offer, the German leader added: “We made clear that a nominal haircut is ruled out”.

Dr Merkel batted off questions about a controversial German proposal, absent from the final deal, for a “time-out” for Greece from the euro failing a third programme deal.

The German “time-out” proposal, floated but not tabled by Berlin on Saturday, caused anger in the Greek camp and head-shaking around Brussels. Eurogroup sources said they understood Berlin’s call for a temporary Grexit as a negotiating chip, a means of pushing Athens to accept the €50 billion privatisation fund.

But Dr Merkel said a key detail of the proposal had been misunderstood: it could only be activated with consent of all 19 members. “It would have been something we could only agree with Greece,” she said. She denied reports the “time-out” paper had prompted a rift with France. President Francois Hollande insisted on Sunday that the eurozone knew only permanent and not temporary exits – something that would be Europe’s loss as a whole.

So was this Merkel’s victory and Tsipras’s capitulation? The German leader bridled at that interpretation. The agreements after the all-nighter came about with full participation of Mr Hollande as well as Mr Tsipras and European Council head Donald Tusk. “At the end we brought together a deal with the other 17 and I think that is what counts given the divergent interests in Europe,” said Dr Merkel.

One final issue is looming large: bridging finance for the cash-poor Greek government. Its most pressing bill, an ECB loan repayment due on July 20th, will be dealt with by finance ministers in the coming days, according to Dr Merkel. In a business-like tone, she added: “I think Greece has a chance to return to the growth path, a path that will be long and, if I am any judge of talks here, arduous.”