Mayor of Palermo accuses EU of ‘genocide’ against refugees 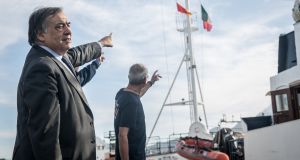 As the Alan Kurdi rescue ship drew away from port in Palermo, Sicily, the city’s mayor waved a vigorous goodbye. “This is your home,” Leoluca Orlando shouted, standing on the dock surrounded by bodyguards. “You are always welcome here.”

Orlando is famed for fighting the mafia, a mission which put his life in danger, but his latest battle is against European policy which he says is responsible for a “genocide” against refugees and migrants trying to reach Europe.

“Do you remember the first process of Nuremberg was against the Italians and Germans for genocide?” the 72-year-old asked, during an interview with The Irish Times.

“At this moment there is another genocide in Libya and in the Mediterranean Sea. It’s a genocide and we will not be able to say to our grandson or granddaughter that we did not know.”

More than 19,000 men, women, and children have drowned in the Mediterranean since 2014. In recent years, the crossing between Libya and Europe has become the deadliest migration route in the world. Many of the people attempting it are fleeing wars or dictatorships in countries including Somalia, Sudan and Eritrea.

Since 2017, in an effort to decrease arrivals, the EU has been funding the Libyan coastguard to intercept boats and return those on them to Libya. Once back again, they are locked up in indefinite detention, in government-sanctioned centres that have been repeatedly condemned for gross human rights abuses.

An untold number of people then die from medical neglect, torture or even being shot trying to escape. Detainees who can pay their way out often try to cross the sea again – sometimes four, five or six times.

“To let these people to stay in concentration camps means to finance criminality because the persons taking care of these migrants in Libya are the same persons paid by the migrants to cross the sea,” said Orlando.

We look forward to leaving, and potentially returning to, Italy’s ports without further complication or aggression

On Thursday, Pope Francis also called for the closure of Libyan detention centres. He unveiled a cross made from a life-jacket, while praising rescue organisations. “How can we not hear the desperate cry of so many brothers and sisters who prefer to risk the stormy seas rather than die slowly in Libyan detention camps, places of ignoble torture and slavery?” asked the pontiff.

German rescue organisation Sea-Watch had its boat released the same day, following an Italian court ruling. The Sea-Watch 3 had been prevented from sailing since June, when captain Carola Rackete entered port without permission, saying the 40 rescued refugees and migrants on board couldn’t wait any longer.

“Sea-Watch and other civil rescuers are the only ones upholding the law, which was proven again today,” Sea-Watch chairman Johannes Bayer said, following the decision. “We look forward to leaving, and potentially returning to, Italy’s ports without further complication or aggression.”

Patrolling off the Libyan coast, the Ocean Viking ship – run by Médecins Sans Frontières (MSF) and SOS Méditerranée – rescued a group of 112 people on Friday morning. Among them were 24 women, three of them pregnant, and 38 children, including a three-month-old baby. A photo showed the boat deflating in the water, and a man at the front holding the infant aloft in his arms. On Friday night the Ocean Viking rescued another 50 people, including 10 children and a baby.

“The weather is severely deteriorating,” tweeted SOS Méditerranée on Saturday night, explaining they still have not been given permission to bring the rescued people to a safe port. “With no instructions to disembark in a place of safety provided by maritime authorities, the ship will now try to seek shelter from bad weather.”

Meanwhile, the problems facing the Alan Kurdi ship, which is operated by German charity Sea-Eye, demonstrate how great the need for more support is. Technical and crewing issues meant its latest mission was delayed, and – after Orlando’s goodbye and 24 hours at sea – it returned back to Sicily on Saturday for more repairs.

Now, a storm is coming, and the ship is expected to remain in port in Mazara del Vallo for at least three days.

The crew and volunteers on board are despondent, though they are spending the extra time practicing first aid skills and simulating rescues.

“Those things happen if you’re operating a 70-year-old ship,” said Sea-Eye spokesperson Julian Pahlke. “We of course dream of a huge ship that would be capable of rescuing hundreds and hundreds of people but we also have to face the fact that our donations do not afford such a ship at this time. Of course there’s no one still out there, that makes it even worse.”