Amateur footage captures a police operation in the Belgian city of Liege after a man killed two police officers and a passer-by. Video: Reuters 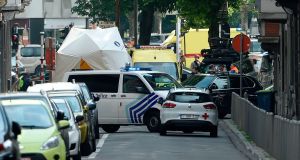 Police and ambulance are seen at the site where an armed man shot and killed police officers in the eastern Belgian city of Liege. Photograph: AFP/Getty Images 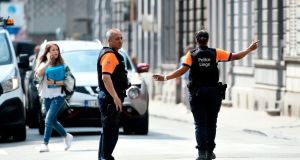 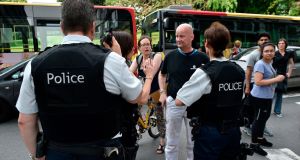 Police officers speak with parents of children at a school in Liege after a man killed three people including two policemen. Photograph: AFP/Getty Images 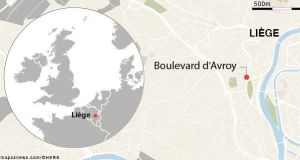 Belgian prosecutors are investigating the killings as a terrorist incident, the local public prosecutor told a news conference.

The man approached two police officers from behind while carrying a knife and stabbed them several times, said Philippe Dulieu, spokesman for the Liege prosecutor’s office.

“He then took their weapons. He used the weapons on the officers, who died,” Mr Dulieu told reporters. The spokesman said the attacker then shot dead a 22-year-old man in a vehicle parked nearby, and took a woman hostage in a school close to where the shooting took place outside a city cafe.

“The attacker came out firing at police, wounding a number of them, notably in the legs. He was shot dead,” the spokesman said.

A senior official at the federal prosecutor’s office said “there are indications it could be a terror attack”.

Despite this, Belgium’s crisis centre said it saw no reason to raise the country’s terror threat alert for now.

Images on social media showed people scurrying for safety on Liege’s central boulevard d’Avroy with shots and sirens being heard in the background. One video showed two police in body armour moving into position.

Liege, an industrial city close to the German border in the French-speaking Wallonia region, was also the scene of a shooting in 2011, when a gunman killed four people and wounded over 100 before turning the gun on himself.

Belgium has been on high alert since a Brussels-based Islamic State cell was involved in attacks on Paris in 2015 that killed 130 people and Brussels in 2016 in which 32 died. – Reuters