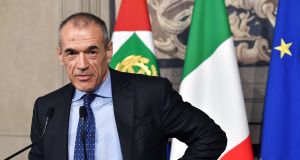 Italy has been in political crisis since the weekend when the country’s 75-year-old president, Sergio Mattarella, refused to accept the nomination of Paolo Savona, a Eurosceptic, for the role of finance minister.

The octogenarian Mr Savona was the choice of the two parties – the anti-establishment Five Star Movement and the far-right League – which had agreed a deal to govern Italy in coalition after an election in March that resulted in a hung parliament.

In spite of Mr Cottarelli’s appointment, the crisis was far from over on Monday night. The spurned populist parties have called mass street protests, and Five Star leader Luigi Di Maio said Mr Mattarella was responsible for “the darkest night Italy’s democracy has ever seen”. He called for the president’s impeachment.

Mr Mattarella, however, won unusual praise from France’s president, Emmanuel Macron. “I simply want to express my regards and support to President Mattarella, who has an essential task, that of his country’s institutional and democratic stability, which he is doing with much courage and a great spirit of responsibility,” Mr Macron said.

The rare intervention by a head of state in the internal affairs of another EU member state was a real measure of the relief felt throughout the union at the exercise by Mr Mattarella of his constitutional prerogative to vet cabinet nominees. His refusal to accept the appointment of Mr Savona resulted in the inevitable resignation of the coalition’s nominee for prime minister, Guiseppe Conte.

Matteo Salvini, the leader of the League, said the appointment of Mr Cottarelli was the death throe of a political establishment intent on keeping Italy “enslaved”.

“The next elections will be a plebiscite – the population and real life against old political castes and the ‘lords of the spread’,” he said.

Membership of the euro is a fundamental choice. If we want to discuss it, then we should do so in a serious fashion

It is also likely the next election will be seen as a referendum on pulling Italy out of the euro.

Mr Mattarella defended his rejection of Mr Savona, who he said was determined to pull Italy out of the currency it had created. Five Star and the League had not sought an election mandate for such a move.

“The uncertainty over our position has alarmed investors and savers both in Italy and abroad,” the president said. “Membership of the euro is a fundamental choice. If we want to discuss it, then we should do so in a serious fashion.”

Five Star and the League won 33 per cent and 17 per cent of votes respectively in the March election. Many observers worry that they will increase their combined majority in a new election.

The markets were not reassured by the president’s move. The yield on Italian two-year debt saw its biggest daily move since the height of the euro zone crisis in mid-2012, up 50 basis points on the day. And equities were hit hard, led by bank stocks. In mid-afternoon trading in Milan, Italy’s main equities barometer was down 2.5 per cent.