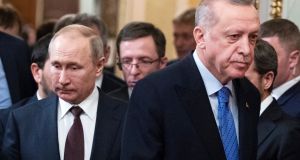 The ceasefire proclaimed by Russia and Turkey in Syria’s northwestern Idlib province is a fix that satisfies none of the combatant parties. The halt to hostilities is unstable and fated to be temporary unless Russian president Vladimir Putin and his Turkish counterpart Recep Tayyip Erdogan reach a political deal to end the Syrian war during coming talks.

Turkey is the main loser. The escalating conflict is frozen on the front lines. Instead of capitulating to Erdogan’s main demand to withdraw to the edge of the Idlib de-confliction zone agreed by Russia and Turkey, the Syrian army retains a large swathe of recaptured territory.

This includes the strategic Damascus-Aleppo M5 motorway and, according to the Britain-based Syrian Observatory of Human Rights, hundreds of villages and towns in Idlib, Hama and Aleppo provinces.

The Russian-backed Syrian army’s swift advance into Idlib demonstrated that Turkey’s insurgent forces were effective only when they had full Turkish army support on the ground as well as air cover from drones and missiles fired from Turkish jets flying on the outer edges of Idlib.

The Syrian army learned that it could lose regained territory if Russia did not provide air and logistical support. Consequently, the Syrian government has to measure military operations to suit Putin’s determination to avoid outright war with Turkey.

The observatory reports that 71 Turkish troops and 1,129 pro-Turkish fighters have been killed for the loss of 1,071 Syrian army soldiers and allied militiamen.

Ankara has had to accept that the Idlib de-confliction zone, the final insurgent bastion, will be diminished and bisected by the 12km-wide security corridor and patrolled by Turkish and Russian officers along the east-west M4 motorway. Turkish-backed jihadis and insurgents based in Idlib have been squeezed into a reduced area.

The pause in fighting and the creation of the M4 corridor could enable the overstretched Syrian army to consolidate its hold on retaken areas in the south while Turkey and its allies could reinforce their positions in the north.

Civilians remaining in insurgent-held areas could stay put, displaced Syrians could return to surviving homes and the 900,000 gathered near the Turkish border can be provided with shelter, food and medical care.

While Turkey cannot provide long-term protection for civilians and client paramilitaries, Russia remains determined to regain all of Idlib and restore Syrian sovereignty over the entire country, including eastern areas held by US-backed Kurdish forces. Turkey’s price for withdrawal from northern cantons may be narrow buffer zones on the Syrian side of the border.

On the political front, Putin is seen around the world as a reliable ally. Erdogan’s policy of “zero problems with neighbours” has collapsed due to his interventions in Syria and, recently, Libya. Isolated in the region, Turkey has received only verbal support from the EU, US and Nato.

In response, Erdogan has dispatched thousands of foreign migrants to Turkey’s northern border with Greece and deployed 1,000 troops to prevent Greece from returning migrants to Turkey. Domestic criticism of his actions is rising.