The EU chief Brexit negotiator Michel Barnier has said there has been no 'decisive progress' on key issues in talks with the UK, criticising Britain for demanding the 'impossible'. He was speaking alongside the UK's Brexit Secretary David Davis. 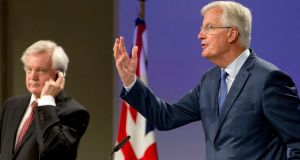 A British guarantee to preserve free movement of all European Union citizens between Ireland and Britain has resulted in a significant breakthrough in the Irish strand of the Brexit negotiations.

The commitment, the European Commission said on Thursday, was an important reassurance that would ensure that Ireland could continue to meet its EU treaty obligations to facilitate border-free travel of EU citizens.

However, discussions on the future of the Irish Border are unlikely to take place until next year due to the slow pace of the negotiations between the two sides.

Sources in Brussels and Dublin told The Irish Times that it was now highly unlikely that the EU would judge that sufficient progress had been made by October’s meeting of the European Council – the heads of all EU governments – to enable the negotiations to move on to the “future relationship” phase.

The EU’s chief negotiator, Michel Barnier, said the talks were a “long way” away from sufficient progress.

This means that the future arrangements for the Border – which depends greatly on the trading relationship between the UK and the EU after Brexit – will not be discussed by the two sides until after the December meeting of the council at the earliest.

At the end of the third round of talks in Brussels, Mr Barnier and his UK counterpart David Davis articulated a mutual understanding that the British-Irish Common Travel Area would remain largely unchanged after Brexit, allowing EU citizens to travel – but not necessarily work – within both jurisdictions.

Discussions about how to preserve the North-South and east-west co-operation mechanisms and programmes that are underpinned by the Belfast Agreement saw broad agreement about the principle but will require much more detailed technical discussions.

The UK negotiating paper on the North was criticised by the commission for being aspirational without sufficient detail of how such programmes would continue.

The progress on the Northern Ireland strand of the three priority talks strands was a sharp contrast to that  on the “financial settlement”, the UK Brexit bill. A lengthy line-by-line UK legal deconstruction of the commission case prompted Mr Barnier at yesterday’s press conference to speak of a deep lack of trust between the sides on the issue and denounce the refusal of the UK to even acknowledge that it had any liabilities beyond Brexit to programmes it had approved.

These included ongoing aid to the Ukraine and Africa, and science research programmes whose future was in doubt.

Mr Barnier deplored the UK’s failure to spell out what it saw its liabilities were. “We need to understand what the UK sees its obligations as.”

Although the Border was not discussed formally it came up in the discussions with the commission again making clear both that the issue was one for the phase-two talks on trade and the future relationship, and that it regarded the British customs proposals as unworkable.

A commission source also dismissed suggestions by the UK that it could obviate the need for Border controls on animal movements in Ireland simply by committing to adopt similar veterinary and food product standards. Crucial to the EU’s animal control regime were not only regulations, the source said, but the institutions and mechanisms to enforce them which the UK is unwilling to remain part of.

Some progress was made on a limited number of issues in the third priority strand, the discussion of “citizens’ rights”, the status and rights of UK and EU citizens residing in the other’s territory at the time of Brexit. Both sides agreed to make provision for the special case of “frontier workers”, those living on one side of the Border and working on the other.

And they agreed to preserve existing social welfare and health rights of the likes of British pensioners living in Spain and French workers availing of the European health insurance card in London.

Agreement was also reached on continuing mutual recognition of professional qualifications for such exiles.

Although the two sides have agreed a definition of “pending cases” that will be handled by European courts after Brexit, there remains a dispute over whether British legal advisers to judges will still have a role. London has dropped demands that British judges remain on the bench of the European Court of Justice for UK cases.